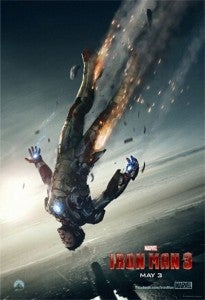 This new trailer will be the second theatrical trailer for Iron Man 3. There was an extended Super Bowl Iron Man 3 trailer released in early February online, but it was not aired in movie theaters.

The second theatrical trailer for Iron Man 3 has been classified with a PG rating. This rating is for the trailer only, and it doesn’t mean that the movie itself will be rated PG. In fact, we fully expect Iron Man 3 to be rated PG-13, just like the previous two Iron Man movies.

In addition to the rating classification, the Alberta Film Ratings website also revealed that the new Iron Man 3 trailer will have a two minute and twenty-five second running time. It has not been officially revealed when the new Iron Man 3 trailer will be released, but it’s a pretty good bet that it will air in front of Disney’s Oz The Great And Powerful, which is set to be released on March 8, 2013.