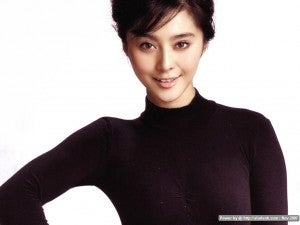 According to a report out today at Yahoo! News, Disney's Chinese production partner DMG Entertainment have reached out to representatives of Chinese actress Fan Bingbing in hopes of bringing her to the negotiating table to take an unspecified role in Iron Man 3.

The film is already shooting in North Carolina, but will take its action-packed show on the road to China for part of the production, with DMG footing some of the production bill and a number of Chinese actors reportedly taking roles. Fans and media have speculated that a larger Chinese presence suggests that The Mandarin may be involved, although Marvel has tried to make clear he is not part of the movie.

Oscar winner Ben Kingsley, who has reportedly been cast as the film's main villain, is being referred to by almost everyone as "The Mandarin" in spite of the studio's protestations.

While Fan Bingbing is the biggest "name" to come out of the Yahoo! story, the site also says that DMG Entertainment Group CEO Dan Mintz revealed that they've contacted Chinese actress Yao Chen and actor Liu Ye to take up other roles in the production.

Iron Man 3 will be in theaters next May.