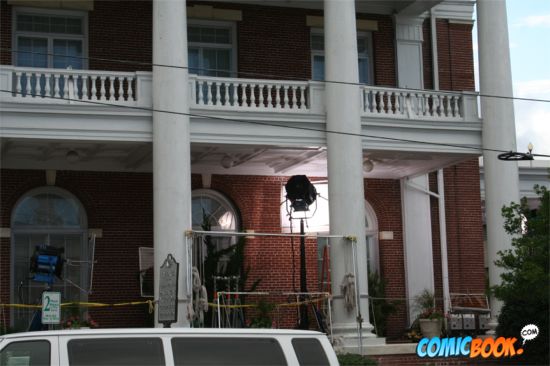 Iron Man 3 filmed a scene at the Cape Fear Club in downtown Wilmington, North Carolina earlier today. The film’s security had things pretty well barricaded up so it was impossible to get any photos of the filming inside. Those that did get a glimpse inside reported seeing extras dressed in military uniforms and suits. The extras in suits were described as looking like Secret Service men.

Robert Downey Jr. was one of the Iron Man 3 stars involved in the Cape Fear Club location shot. According to early reports, there was supposed to be another star also present, but no one was able to identify anyone else.

Not many people were present outside the filming, mostly just a couple fans that had driven in and a couple members of the local Wilmington media. While talking to some Wilmington locals, we had one source involved with the production tell us that Mandarin was definitely the villain. He said Mandarin had a set of twins that did most of his dirty work for him. Another source who had visited EUE/Screen Gems Studios told us that the sets they were building included Chinese storefronts.

Probably, the biggest piece of information we learned, which we reported earlier is that part of the story for Iron Man 3 will be set in Miami, Florida. A source close to the production revealed that he had seen vehicles emblazoned with logos for the city of Miami and Miami Police Department being unloaded on one of the sets.

Filming at the Cape Fear Club actually wrapped earlier than expected, but word was that more filming was going to take place at or near the Wilmington International Airport. Iron Man 3 is scheduled to be released in theaters on May 3, 2013.