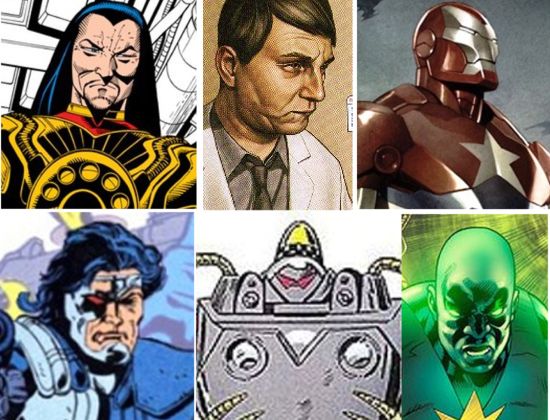 As far as The Mandarin, there has been a lot of conflicting info on how big a role he will play. While a source close to the production indicated to us that The Mandarin would be the main villain, Latino Review insisted that he will be more of a behind-the-scenes villain. Considering The Mandarin is one of Iron Man’s most well-known villains, it’s hard to imagine him playing second fiddle to anyone.

While Guy Pearce’s official role has yet to be confirmed, it’s been widely speculated that he will play Aldrich Killian. Latino Review reported that Guy Pearce’s Killian would actually be the central villain in Iron Man 3. Of course, Guy Pearce himself seems to have contradicted that report by describing his role as a cameo. While we’re unsure of how large a role Guy Pearce will play, we do know that he’s been involved in enough scenes in Wilmington, North Carolina filming that his role is likely more than just a cameo.

In addition to The Mandarin and Aldrich Killian, Firepower and Coldblood are also reportedly villains in Iron Man 3. James Badge Dale is rumored to be playing Coldblood, while Ashley Hamilton is rumored to be playing Firepower. This sort of goes along with what a source told us about The Mandarin having evil twins that did his dirty work. While Firepower and Coldblood aren’t twins in the comics, the source was likely describing them as such, because Dale and Hamilton do look similar.

Now, here’s where it gets really interesting. In addition to The Mandarin, Aldrich Killian, Firepower, and Coldblood, there are two more potential villains. Some photos from the first day of off-site shooting for Iron Man 3 showed what looked to be the Iron Patriot armor. Latino Review refuted that the photos showed Iron Patriot and instead claimed it was a new armor design for War Machine. However, a source told us that Iron Patriot is in Iron Man 3, and Marvel has recently registered several new trademarks for Iron Patriot. What is a big mystery is whether Iron Patriot will be a villain like in the comic books or if it will be just a new name assigned to War Machine.

Besides Iron Patriot, another potential villain is the Radioactive Man. It was recently revealed that Chinese actor Wang Xueqi was in talks to play Chen Lu, who becomes Radioactive Man. Now, while Radioactive Man was initially a villain in the comic books, he has also worked on the side of the good guys. Some reports have suggested that Chen Lu might actually be a hero in Iron Man 3, and he could be featured in an after the credits scene to help set up the Ant-Man movie. There’s also the possibility that Wang Xueqi just plays Chen Lu and never turns into Radioactive Man.

So what does this all mean? Well, it’s a pretty good bet that there are at least four villains in Iron Man 3. The Mandarin, Aldrich Killian, Firepower, and Coldblood appear to almost certainly be villains. However, don’t be surprised if two more villains show up in the form of Iron Patriot and the Radioactive Man to raise the total to six. Also, it’s been confirmed by set photos that the terrorist organization A.I.M. will play a role in Iron Man 3, so if you count that organization as a villain that brings it up to seven potential villains.

Iron Man 3: So How Many Villains Are There Really?