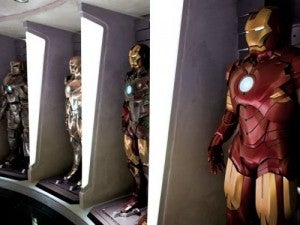 According to local media reports coming out of Miami, Iron Man 3 will film there this summer for between four and six weeks, primarily doing location shoots (the kind of stuff you can't easily reproduce in a studio that makes the scenes set in Miami, identifiable as Miami).

Graham Winick, film and event production manager for the City of Miami Beach, claims that they had hoped the film would stay there longer, but since Iron Man requires 300,000 square feet of studio space, there just wasn't anyplace in Southern Florida that could accommodate Marvel's needs.

While non a monumental piece of the puzzle, this does explain why--in spite of having announced that they were doing some shooting in Miami--there were Miami police and fire vehicles being unloaded from trucks in North Carolina; apparently there just wasn't anyplace to keep them all at the site of the Florida shoot.

Iron Man 3 is currently filming in North Caolina. It will shoot in China and Florida later in the year and will be in theaters in May 2013.

Dr Disrespect Already Has a Big Problem With Battlefield 2042

Loki: Owen Wilson Reacts to Tom Hiddleston's Impression of Him

Ant-Man and the Wasp: Quantumania Star Returns to Twitter