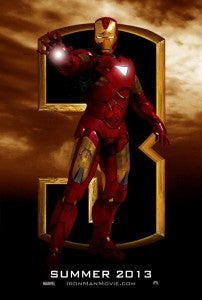 The first trailer for Iron Man 3, the first film in Marvel's "Phase Two" of films based on their superhero comics, will be released on Tuesday, the company has confirmed via their website.

While fans and the comics press have expected that it would be coming any day now, Marvel has now provided fans with the URL at which the trailer will go live Tuesday.

The film, due in May, follows the events of The Avengers and sees Tony Stark stripped of his resources and facing off against The Mandarin with his back against the wall, according to Marvel's official summary. The Ten Rings--the terrorist group that appeared in the first film--will play a role, as will the Extremis serum from the Warren Ellis run on Iron Man comics, according to multiple sources.

Are you ready for your first look at Marvel's "Iron Man 3"?

This Tuesday we'll have the first trailer for you right here on this very page, so check back then to see it for yourself--but in the meantime, like the official Iron Man page on Facebook and follow @Iron_Man on Twitter for all the latest updates on the Armored Avenger!

And for even more Tony Stark, visit the "Iron Man 3" hub right here on Marvel.com.

Remember to bookmark this page and come back Tuesday for your first look at the official "Iron Man 3" trailer, and mark your calendars for May 3, 2013 when it hits theaters!