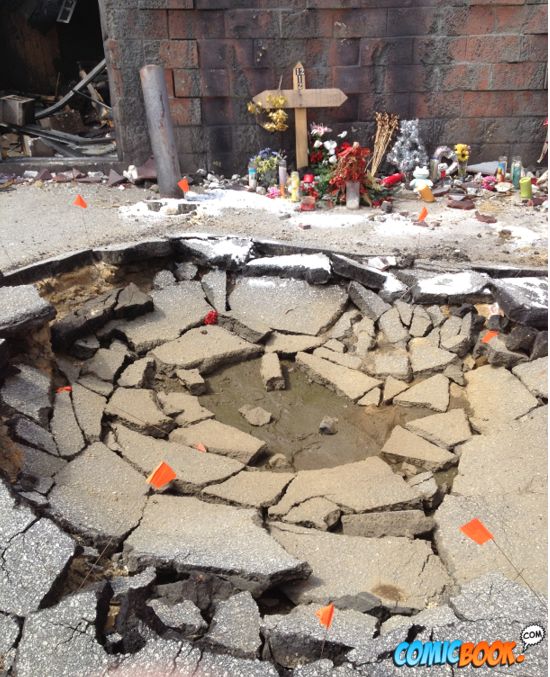 “It opens with a voice over of Tony Stark talking about how the events of New York (I’m assuming the Avenger Movie) changed him, and how he’s just not “into it” anymore.   First scene is Iron Man with battle damage, laying down amid rubble and taking off his faceplate to show a bleeding Stark. Scenes of him arguing with Pepper Potts in the armory (cool shots of alternative Iron Man suits including the red white and blue one we’ve seen on your site already),  press conferences, Tony looking solemn, Tony talking with someone who looks like a psychiatrist, and a short shot of Don Cheadle in military uniform (no War Machine in the preview). Also one scene of who I presume is the Mandarin, forcefully landing and cracking the ground.  However, it looked like a silver Iron Man.  I was unable to tell in the brief view who it was (maybe due to  unfinished CGI).

We then get a voice over from Ben Kingsley, talking about how there are no heroes and how he will teach everyone, especially Stark, a lesson. This is over scenes of the alternative Suits getting blown up, Stark going into surgery, and a fleet of helicopters launching missiles which blow Stark’s home up and apart (the CGI looked nearly finished) and sending Stark and Pepper into the sea below. Then a close up of Kingsley with no helmet in the Mandarin armor.

It ends with Iron Man underwater swimming towards what looks like his “heart reactor thing”. Then the logo, then Stark walking in the snow dragging a large bag, then the logo again. All and all, a somber trailer, dark and humorless, which seemed more in tone with  The Dark Knight Rises than with any of the other Iron Man movies or the Avengers.”

Of course, the helicopters blowing up Tony Stark’s mansion was already confirmed from Comic-Con. The scene of the Mandarin forcefully landing and cracking the ground matches up with the cracked pavement we photographed during Iron Man 3 filming in Rose Hill, North Carolina. Also, the scene of Iron Man swimming underwater is something we have heard repeatedly since it was first announced that Iron Man 3 would be filming in Wilmington, North Carolina. One of the reasons that EUE/Screen Gems was selected as the studio for filming was because they have one of the biggest special effects water tanks in the United States.