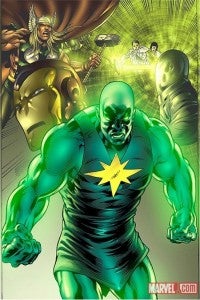 Awhile back rumors surfaced that Andy Lau would play Dr. Chen Lu (who becomes the Radioactive Man) in Iron Man 3. Of course, eventually those rumors proved to be false or Andy Lau turned down the role for whatever reason.

Since Iron Man 3 is being co-produced in China, there had been much speculation over what high profile Chinese actor might be recruited for the role. Now, thanks to Mtime.com (translated via China.org.cn), it looks like we have an answer. The site recently spotted Chinese actor Wang Xueqi talking with Iron Man 3 producer Dan Mintz in Beijing.

Wang Xueqi will reportedly play the character Chen Lu, who was previously tied to Andy Lau. In the comic books, Chen Lu is a scientist who becomes the super villain the Radioactive Man and works for The Mandarin. Wang is sixty-six years old, and he has appeared in a number of films such as Bodyguards and Assassins, Forever Enthralled, and The Red Suit.

Iron Man 3 will reportedly do some filming in China soon, possible as early as sometime in September. At Comic-Con, director Shane Black announced that he and the principal cast and crew would not be filming in China. Black’s comments seem to indicate that any Chinese filming will likely be done by a different cast and crew, so Wang might be featured primarily in the shooting taking place in China.