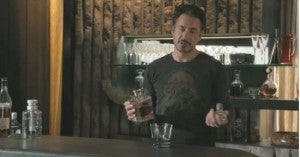 According to a new interview with Iron Man 3 writer Drew Pearce and writer/director Shane Black, the pair would have liked to include elements of the classic "Demon in a Bottle" story from Iron Man #120-128.

That the story would serve to inform the plot was one of the earliest rumors surrounding the film, and one that dogged production for long after a number of people involved with the movie denied it was being adapted. Eventually everyone realized there simply wasn't enough room for such an emotionally challenging story to appear in a movie that was already packed to the gills with villains, armors and other subplots.

That's not always been the case, though, and Pearce admitted in an interview with a stringer for Comic Book Movie that "In our first draft Tony was a bit more rock 'n' roll," but that the character's alcoholism ran afoul of Disney's internal censors.

"Even if you look at the websites of the mommy bloggers they say, you know, 'Watch out, mom's! Tony drinks in this movie!' It's amazing. There's one or two scenes in this movie where he picks up a drink and it'll be in those blogs," Black said. While he said there's only a glass of wine in Iron Man 3, he still expects that to be an issue, adding, "so they'll say 'watch out because he drinks'. It's pretty amazing because it used to be you drank all the time in movies."

That isn't to say that Disney was uncomfortable with a bit of moral ambiguity from Tony Stark--just that alcoholism wasn't a direction they were willing to take it. "I think we were just told by the studio that we should probably paint Tony Stark as being kind of an industrialist and a crazy guy, or even a bad guy at some points, but the Demon in a Bottle stuff of him being an alcoholic wouldn't really fly," Black said.

Added Pearce, "It's also kind of a 'pick your battles' thing; alcoholism is a massive problem but it's also not the best villain for a movie."

All of this, of course, doesn't mean that Disney won't eventually change course, especially if the franchise is eventually perceived to be in need of a revitalizing chapter.

"I wouldn't be surprised if at some point someone wanted to make a movie and they'd run out of directions for the character, then they've still got Demon in a Bottle," Black told the site.