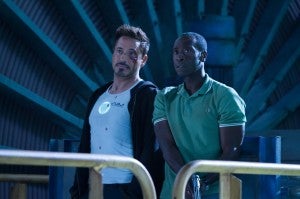 While Marvel Studios President Kevin Feige told Entertainment Weekly today that Marvel's Agents of S.H.I.E.L.D. showrunners are "avoiding the cameo of the week," at least one big star won't rule out appearing on the series. Entertainment Weekly asked Robert Downey, Jr. about the possibility of bringing Tony Stark to the small screen to reconnect with his old buddy, S.H.I.E.L.D. Agent Phil Coulson. His response? "You know what? There's no telling. I am open to everything." Certainly it seems unlikely—Downey hasn't been on TV consistently since Ally McBeal about a decade ago. Still, with so many people focused on whether he'll even return to the Iron Man franchise at all, it's likely to be one of those lines that gets quoted and referred back to for a while. Asked whether there might be room for lesser-known Marvel characters to appear on the show, Feige seemed to be pretty open to the possibility--without necessarily committing to it. "If that works the way everyone expects it to work I think that would open up another avenue, another outlet for some of those characters," Feige said. "Maybe they guest star, I don't know. I think they're avoiding the cameo of the week on that show, which is very smart."

Goldberg Gives a Big Update on His WWE Status

House of the Dragon: Why Lady Laena's Death Is More Important Than You Think

Rings of Power Director Reveals Most Challenging Effect for the Series