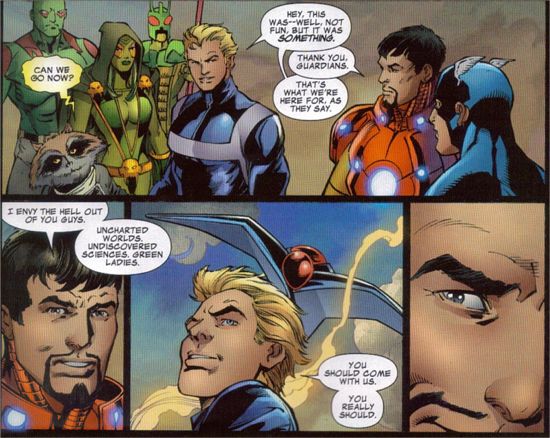 While we’ve been unable to confirm this as definite, our sources are telling us that Marvel Studios wants to put Robert Downey Jr. as Iron Man in the Guardians Of The Galaxy movie. At New York Comic Con, Marvel made a surprise reveal of the cover of the first issue of the new Guardians of the Galaxy comic book, which showed a character that looked like and was later confirmed to be Iron Man.

After this news broke, Comicbook.com ran an article speculating that Marvel Studios could be planning to include Robert Downey Jr. as Iron Man in the Guardians of the Galaxy movie. After the article, a source indicated to Comicbook.com that is indeed the plan. Of course, the whole thing is likely dependent on if Robert Downey Jr. signs a new deal with Marvel Studios, and his contract is currently set to end with Iron Man 3.

In addition to the claim from our source, there has been some recent foreshadowing that it will indeed be Tony Stark's Iron Man joining  the Guardians of the Galaxy. The Avengers Assemble comic book was specifically launched to feature a team of Avengers, which would be familiar with new fans arising from the movie.  In the Avengers Assemble #8 comic book, Tony Stark is invited to join the Guardians of the Galaxy in their outer space adventures.

Stark says, “I envy the hell out you guys. Uncharted worlds. Undiscovered sciences. Green ladies.” Starlord responds, “You should come with us. You really should.” Stark smiles and says, “I do owe myself a vacation.” The story ends with a “To be continued in Guardians of the Galaxy in February 2013.”

While we’re unsure if this connects, a twitter account with the handle Roger Wardell has been known to tweet some Marvel Studios new before it has been actually announced. Before the New York Comic Con revelation of Iron Man appearing in the new Guardians of the Galaxy comic book, Wardell tweeted, “Inside News: Remember that the Guardians of the Galaxy banner was only concept art, so that may not be the final roster of the team.”

In other tweets, Wardell has suggested that Iron Man 3 underwent a last minute rewrite particularly in the film’s third act and that Iron Man 3 will feature a mid credits scene and a post credits scene. Our sources aren't familiar with a rewrite or how many in credits scenes there are in Iron Man 3, but if Wardell is correct, then here's a little bit of speculation.

With two credits scenes it would seem likely that one of them ties into a future Marvel Studios movie. While most speculation so far has focused on an Ant-Man tie-in, Marvel Studios recent announcement that the Ant-Man movie won’t be released until November 6, 2015 makes that speculation unlikely. What would make more sense is a tie-in to Guardians of the Galaxy, since it has an August 1, 2014 release date. Could the rewrite and the additional credits scene be to tie into Iron Man leaving to join the Guardians of the Galaxy? By all accounts, we've heard from the Iron Man 3 set, Tony Stark gets put through the ringer in Iron Man 3, so maybe by the end of the movie, he's thinking a little time away from Earth would do him good.

Iron Man To Be In Guardians Of The Galaxy Movie?