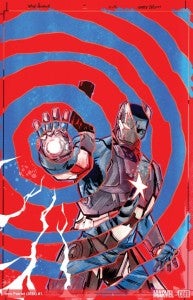 Taking on the post-War Machine role that he took on in the Marvel Cinematic Universe, Rhodes will step out from under the shadow of the original Iron Patriot, longtime Marvel villain Norman "Green Goblin" Osborn.

In a new series launching in March by writer Ales Kot and artist Garry Brown, Rhodey will be defining what it means to him to be a Patriot and what his role is in a world where the government is increasingly intertwined with superheroes and superheroics.

"Tony Stark is Rhodey's best friend. Rhodey is Tony's best friend. Tony Stark's spirit will be present in his inventions and in the landscape of the Marvel Universe we will show, but this is a James Rhodes comic first and foremost, and I am very excited about that," Kot said. "James Rhodes is such an iconic character, as himself and also as Iron Patriot. You can knock him down, but he will get back up. You can tear into him, but if he knows that what he's doing is right, he will not stop. You can try to break him, but if there are people that need help, he will run or fly towards them. I find that immensely inspiring."