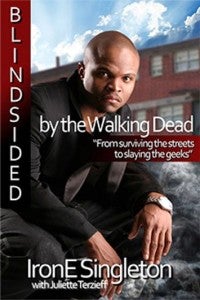 IronE Singleton played Alton in the Academy Award nominated film The Blind Side, and he played fan favorite T-Dog for three seasons on The Walking Dead. In an exclusive interview with Comicbook.com, IronE chatted with us about his time on The Walking Dead, his book Blindsided by the Walking Dead, and his upcoming appearance at Walker Stalker Con in Atlanta, which is a fan gathering bringing together a huge number of current and past Walking Dead cast members.

Comicbook.com: What have you thought of Season 4 of the Walking Dead so far?

IronE Singleton: It’s picking up. I was interested in what was going on with Patrick. I’m still curious. What is killing people? Is it in the water? Is it in the pigs? Somebody gave me an interesting twist to that. They suggested it could be the humans infecting that animals, infecting the pigs. I was like, “Wow, I didn’t think about it that way.” That is what peaked my curiosity in Episode 1. And now in Episode 2, who burned the bodies? What is going on? I think it’s about to get really, really exciting.

Comicbook.com: Have you gotten a chance to visit the set during filming of Season 4?

IronE Singleton: I have been so busy I have not been down there yet. I’ve been saying to myself when I get an opportunity I’m going down there. I’m a couple hours away. I’m doing so many things like preparing for this one man show that’s been a long time in the making and going to all these conventions, speaking engagements. I have not had an opportunity yet.

Comicbook.com: With The Walking Dead spinoff series in the works, is there any chance that T-Dog could be back in a flashback or like a prequel series?

IronE Singleton: I’m hoping to be in the spinoff [laughing]. How cool would that be to be a part of that show? Anything that happens, I’m maintaining a really great relationship with everybody attached to the show. [Walking Dead creator] Robert Kirkman and Brian Huntington, those guys over at Skybound, I post on their website very Friday to let people know what’s going on. That blogspots called T-Dog It’s Friday. [Walking Dead executive producer] Gale Anne Hurd’s production company Valhalla gave me an opportunity to take over their Twitter account. And then, over at AMC, Charlie Collier, president over there, we have a really good relationship. So it could happen. I could pop up anywhere. I’m looking forward to the future.

Comicbook.com: I know you played a role in getting Hines Ward a cameo on the show. I think it was filmed after T-Dog was killed off, were you still able to take part in that filming and be on set?

IronE Singleton: I was there while he was filming. Indirectly, I had a part in that. We did an interview, Hines and I did, for NFL films. The director for NFL films he loved the show so much he was looking for a tie-in. He was like, “Man, I want to find a way to tie in The Walking Dead and football in some kind of way.” He was looking at the cast and saw I was a football player. He saw I played at the University of Georgia, and instantly Hines Ward came to mind. He had just retired and just won Dancing with the Stars. It was perfect, the stars aligned perfectly. Hines and I had a nice reunion and that same day Hines wound up shooting his cameo as well. Indirectly, I had something to do with it.

Comicbook.com: How did you find out your character was getting killed off? Was it something you just read in the script or did they pull you aside beforehand?

IronE Singleton: They tried to pull me aside, but I kept running. I was avoiding the inevitable. Glen Mazzara, showrunner at the time, he called me, and he said, “IronE, I need to talk to you, give me a call back please.” And I’m like, “That doesn’t sound to good.” I avoided the phone call for a little while. I called him back, and I was like, “This is IronE retuning your phone call, bye.” He finally tracked me done and told me. He told me my time on the show was great and I gave so much to the character and the show, and it was time for T-Dog to exit. It was a numbing experience, but I kind of expected that was what he was going to tell me. But it was a month in advance. He was gracious enough to let me know that far ahead of time.

Comicbook.com: They say that no one is safe on The Walking Dead. What are your thoughts? Do you think that there are central characters like Rick and Daryl that they won’t ever kill off?

IronE Singleton: Well, we will know that no one is safe in the next episode when both Rick and Daryl die……laughing…..I’m just teasing. I don’t think anybody’s safe. It just depends on all the variables. The show has a full head of steam. It’s moving. I think if anybody drops off the show still continues to move forward.

Comicbook.com: I know you touched briefly on your one man show, and I know you also have a book out. Could you tell me a little more about what you’re doing with that?

IronE Singleton: Blindsided by The Walking Dead, both the book and the show, detail my life, destitute in the inner city projects…inner city housing project in Atlanta. And not having my father there, I saw him twice in my life, on two occasions. And my mother, she was addicted to crack, and she was an alcoholic. My brother, he’s probably been arrested more than twenty times, back and forth it was like a revolving door. He was a couple years older than I am. Actually, overcoming those things, and ending up at the University of Georgia, where I played ball there. Lifelong dream of mine, ever since watching the Bulldogs and Herschel Walker, so that was a dream come true. I studied theater there, and it ended up taking me on into Hollywood, where I did The Blind Side with Sandra Bullock. And it eventually led me to The Walking Dead, which people love all around the world. I detail all of that in my book. I elaborate on my time with The Walking Dead and The Blind Side. In my one man show which opens in Athens, how appropriate that’s where it all began, I have drama, comedy, dance, spoken word, and I rap. I think everybody will leave that show feeling good about themselves. I’m excited about that and the book as well.

Comicbook.com: Do you play a lot of different characters in the one man show?

IronE Singelton: I play eighteen different characters in the show. No costume changes. Once I’m on stage I stay on stage for an hour and forty-five minutes. There is about a fifteen minute intermission. It’s a great show.

Comicbook.com: Are there any other film projects you have in the works?

IronE Singleton: I’m focusing on the one man show. That’s top priority. That’s about inspiration, about hope, about love, and some other positive elements. I had to put the movies on the back burner, but I’m trying to figure everything out. I haven’t signed on the dotted line yet, but if I do, expect that it will be some Oscar-worthy material. Because these scripts I’m looking at, they are amazing. These roles that they have for me are quite amazing as well. We’ll see what happens.

Comicbook.com: Are you excited about getting to reunite with both current and past cast members at Walker Stalker Con in Atlanta, Georgia?

IronE Singleton: It doesn’t get any better than that. I don’t even know how Eric and James [Walker Stalker Con organizers] pulled it off. I’m most excited about that. We see each other occasionally. I run into everybody at the conventions except for Andy Lincoln.  It’s been awhile since I’ve seen him. I haven’t been down to the set or anything. When I saw he was going to be there, I think I had kind of like a fan moment or something. Andrew Lincoln’s going to be there! That’s pretty amazing right there.

Fans call follow IronE Singleton at his website IronESingleton.com, on twitter @ironesingleton, on Facebook, and on the official Walking Dead website with a regular column called T-Dog! It’s Friday. Fans can meet IronE Singleton at the Walker Stalker Con in Atlanta, Georgia on November 1-3, 2013.