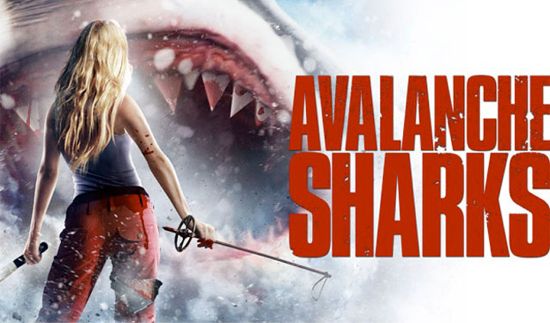 Remember the SyFy channel movie about a tornado filled with sharks that became a social media sensation. While the first airing of Sharknado only did average in the ratings, the movie attracted so much social media attention that it led to re-airings, a limited theatrical run, and an upcoming sequel.

Now, another shark movie looks to follow in the shoes of Sharknado. Avalanche Sharks is a movie about a giant shark that lives in the snow near a mountain ski resort. This snow shark rises up out of the snow and attacks people. Fangoria scored the first official trailer for this soon-to-be classic, but it’s not quite clear when or where Avalanche Sharks will debut. Here’s the official synopsis for the film.

“After a horrific avalanche, the staff at Twin Pines Ski Resort starts to receive reports of missing people and creatures that move beneath the snow. As the body count piles up, the management tries to cover up the situation, which leads to disaster on their busiest day of the year: Bikini Snow Day.

Spring break in the mountains: snowboarding, beer, drunken co-eds in bikinis. As the yearly Bikini Ski Day party descends on a small mountain town, something lurks beneath the snow. When an unwitting rider causes an avalanche, it awakens a huge, menacing, prehistoric Snow Shark! With a newfound taste for human flesh, the Snow Shark picks off the snow bunnies mercilessly. Cut off from help by mountainous terrain and blinding snow, the local sheriff must make an unlikely alliance with a motley crew of snowboarders to take down the Snow Shark before the white hills run red with blood!”

Is Avalanche Sharks The Next Sharknado?