Many fans and critics are rushing to declare Captain America: The Winter Soldier "the best Marvel movie yet."

It seems like this happens about once a year.

It isn't every time Marvel Studios release a new movie that people rush to declare it the best Marvel movie -- or, the popular variation, "the best superhero movie ever" -- but it's not uncommon, either.

Critical consensus seemed to be that Marvel's The Avengers was the best of the Marvel Studios films up until now, and the only film that competed with that for the "best superhero movie" designation in the eyes of many critics was Christopher Nolan's The Dark Knight.

There is, of course, a massive difference in the types of films that The Avengers and The Dark Knight represent. Part of the reason so many people have fallen in love with The Winter Soldier seems to be that it bridges that gulf without seeming too preoccupied about doing so.

Marvel Studios's house style, established in Iron Man and honed throughout the first "phase" of Marvel solo superhero movies, was to keep things light, keep the heroes bright, use a lot of humor and a very Silver Age-friendly dichotomy between good and evil that other superhero films -- especially Bryan Singer's X-Men franchise with its focus on the parallels between Magneto and Xavier, and the DC Comics movies that are so drawn to a "real-world," Chris Nolan-inspired aesthetic -- have largely abandoned.

Marvel's style is undeniably working. Most of their films receive positive reviews, with all but a couple "certified fresh" on the movie review aggregator Rotten Tomatoes. They also generate a ton of heat at the box office, with The Avengers and Iron Man 3 both cracking the $1 billion mark worldwide.

It isn't, though, without its critics. Some have noted -- myself sometimes among them -- that the Marvel Studios films are spectacular adventures, but that they ultimately are so filled with spectacle that there isn't a ton of room for story. This makes them feel a bit disposable, as each new film has to be bigger and bigger, leaving the spectacle of the previous installment feeling somewhat muted. It's a chain that was broken with The Avengers, in no small part because Marvel have made a conscious effort to delineate team and solo films by making Avengers stories real "all-hands-on-deck" scenarios, while the solo movies focused on challenges that stretch the abilities of the individual hero but which may or may not have merited a team-up (Thor: The Dark World is a difficult one to really put a finger on, in part because Thor is so powerful that anything able to challenge him is probably dangerous enough to merit others coming to help, but that's a long-standing trope of solo comic books that's just being carried over to the film universe). 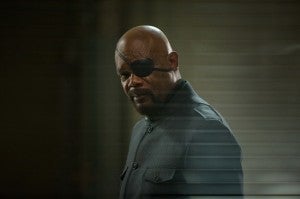 Iron Man 3, then, was much more intimate than The Avengers. And while Captain America: The Winter Soldier was a widescreen, large-scale action epic, its primary focus was on a clash of ideals and personalities that Steve Rogers is better-equipped to handle than anybody else.

Steve Rogers is the engine that drives the film forward, and Chris Evans delivers with an earnestness and likability that is impossible to deny. The plot is complex, rich with details, references and inside jokes  that both inform the future of the Marvel Cinematic Universe and effectively call back to previous films without getting in the way of the overall narrative, which continues to be about Rogers.

This is, to many critics, the movie where Marvel "grew up." The fact that the film is much more aware of its own moral center than previous Marvel Studios have been makes Captain America the perfect centerpiece. This is a bit like the cinematic version of Mark Waid and Alex Ross's Kingdom Come: It allows the world to change around the hero without insisting that he change -- and in fact the idea that he doesn't is played as one of his strengths, and the thing that makes his character compelling to begin with. 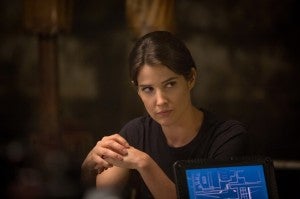 It works well for The Winter Soldier and it's a good look for Marvel going forward. The focus on character allows Marvel's iconic superhero properties to feel less like properties and more like people, which calls for a somewhat less glossy version of the world. That they work for a super-spy organization at a time in world history when nobody trusts their own government, let alone a highly militarized international espionage-slash-peacekeeping organization was begging to be addressed, and the rather spectacular fashion in which it was dealt with in The Winter Soldier will have reverberations through the rest of Marvel's interconnected storytelling, beginning with Tuesday's Agents of S.H.I.E.L.D.

So, is this the best Marvel movie? It depends on who you ask, and what they're looking for. The thing that makes The Winter Soldier so appealing (and has so many critics and fans ready to lavish it with praise) is that it overcomes the flash-over-substance feel that its predecessor had and the action-is-everything mentality that drove The Avengers without totally losing either. Captain America: The First Avenger remains the most visually interesting of the Marvel Studios films to me because it's such a departure from the house style -- and it came at a time when that style was well-established, with Phase One nearly over already. The Winter Soldier deftly incorporates the Captain America franchise into that house style without losing a sense that there is a distinct visual flavor to Cap's movies.

To folks like myself, who have been saying for years that big, fun adventure movies like The Avengers are awesome but ultimately not emotionally or intellectually fulfilling,  in Captain America: The Winter Soldier the studio has finally crafted a movie that can stand shoulder to shoulder with The Dark Knight Trilogy on its own terms.

Is Captain America: The Winter Soldier The Best Marvel Movie Yet?