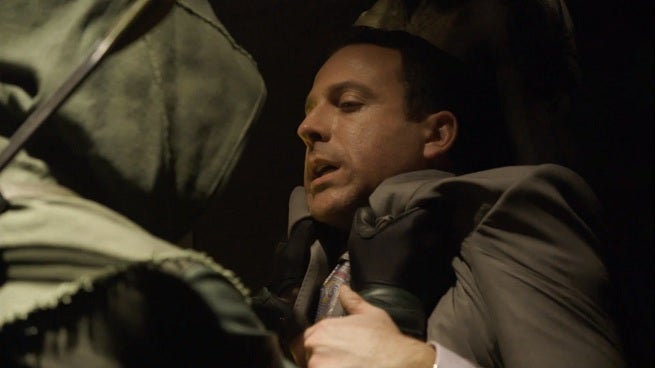 If you watch Hawaii Five-0 on CBS, there's a decent chance you missed a clever reference this week that, if you read it the right way, could suggest that the series takes place in the same universe as Arrow and The Flash from DC Entertainment.

That's because Arrow Executive Producer Marc Guggenheim's brother is a writer on Hawaii 5-0, and he name-checked a villain from the hit superhero drama on CBS's cop drama this week.

Dominic Alonzo, the character from Arrow Ep. 1x21, gets name-checked on tonight's Hawaii 5-0, written by my brother, Eric. ‪#‎synergy‬

Dominic Alonzo, in Arrow, was an underground casino owner hired to kidnap Walter Steele in the Season One episode "The Undertaking." When The Hood (Arrow) threatened him, Dominic believed he had delivered Walter to his death, but that later proved not to be the case.

I like the think Dr. Max Bergman has real trouble swallowing the preposterous notion of superheroes...!

Of course, we're being silly. There's nothing to indicate that these shows are in any way connected.

Then again, there's not much to really indicate a connection between the shows in the "Tommy Westphall Universe," and that theory is a ton of fun, too.

Is Hawaii Five-0 Taking Place in the Same World as Arrow and The Flash?!