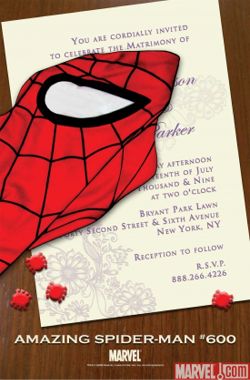 With all the attention that Archie Comics has been getting over the upcoming wedding of Archie Andrews and Veronica Lodge, Marvel Comics must be getting a little jealous. Never one to shy away from the hype, Marvel Comics recently released a teaser image for Amazing Spider-Man #600 that hints at a possible Peter Parter and Mary Jane Watson re-marriage. As every fanboy knows, the erasing of Peter Parker and Mary Jane Watson's marriage in the "One More Day" storyline was one of the most controversial comic book storylines ever. The newspaper comic strip version of Spider-Man initially followed the comic book storyline in undoing Peter Parker's marriage. However, the newspaper comic strip recently recreated the marriage, which has led to speculation that the comic book might follow suit. In order to throw some gasoline on the burning speculation, Marvel Comics' teaser image shows a wedding invitation that is partially obscured by the Spider-Man mask. The last three letters on the first name on the invitation are visible as "son" and the last four letters on the second name on the invitation are visible as "arker." While there has been some speculation on the teaser, most are writing it off as a wedding announcement for J. Jonah Jameson, Sr. and Aunt May Parker. Their engagement has already been revealed in the Spider-Man comic book, and their last names would also fit the part of the wedding announcement that has been revealed. However, there is one big hint on the wedding announcement that Marvel Comics might have more in store than a wedding for a previously announced engagement. Traditionally, the bride's name appears first on a wedding invitation, and clearly the name that appears to be "Parker" is the last name on the invitation. I'm pretty sure Aunt May is a stickler for tradition and would not allow her name to appear last on a wedding invitation, so the invitation must be for her nephew Peter Parker.

Is Spider-Man Getting Married Again?