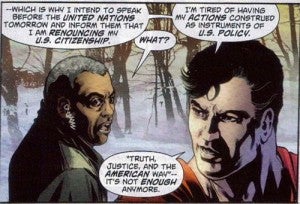 In a nine page back-up story in Action Comics #900, DC Comics has introduced what is quickly becoming the most controversial comic book story ever written. As most of the world now knows, Superman has announced his plans to renounce his U.S. citizenship. After getting grief from the President's National Security Advisor over how his recent trip to Iran had created an international incident for the United States, Superman said, "Which is why I intend to speak before the United Nations tomorrow and inform them that I am renouncing my U.S. citizenship. I'm tired of having my actions construed as instruments of U.S. policy. Truth, justice, and the American way – It's not enough anymore." Often comic book companies will intentionally court controversy in order to capture the attention of the media. The most often used media-baiting techniques are killing off a character, featuring a real life person like President Obama in a comic book, or revealing a character is gay. The irony of the Superman citizenship story is that it doesn't appear like DC Comics anticipated it creating the media firestorm that has ensued. The main story of Action Comics #900 centered around Doomsday, who was responsible for Superman's death back in 1992. Previous to the Superman citizenship story, "The Death of Superman" was likely the biggest and most controversial Superman story of all time. Back in the early nineties, the thought of one of America's iconic characters dying made a huge splash in the press and resulted in lines at comic book stores everywhere. DC Comics likely thought the introduction of multiple Doomsdays for Superman to fight would remind everyone of Superman's death and capture the attention of the press. Instead, no one in the press cares about the main story, but everyone is in an uproar over the backup story. With all the recent controversy over whether President Obama was born in the United States or not, it's easy to see how Superman renouncing his U.S. citizenship could become a hot button topic. The story essentially throws Superman into the political arena, which will be supported by some and create outrage in others. So will the controversy over this Superman backup story quickly fade away? Or is this a story that has hit at just the right time where it could become a part of the political campaign of potential Presidential candidates? Has DC Comics unintentionally published what could become the most controversial comic book story ever written?

Is Superman Renouncing American Citizenship The Most Controversial Comic Book Story Ever Written?