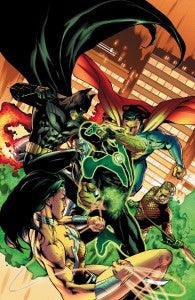 DC Entertainment have unveiled Doug Mahnke's cover to Green Lantern #14, due out in November from the publisher, and it features the veteran artist's take on the Justice League as they square off against new Green Lantern Baz against the backdrop of the Rise of the Third Army storyline and a disappeared Hal Jordan.

“We’re going to be meeting a brand new Green Lantern in issue #0, and unlike his predecessors, he’s not the sort of guy you’d be expecting to wear the ring. That’s putting it mildly,” said series editor Matt Idelson. “After the events of Green Lantern Annual #1, Hal Jordan is MIA in a very big way, and our new Green Lantern finds himself in a new role, though his troubled life isn’t going to go away in the slightest. In fact it’s the things he’s notorious for that in large part bring the Justice League into the picture—they want to know what’s happened to Hal, and what this guy thinks he’s doing filling the role of Green Lantern. It’s going to be intense, but also very, very cool.”

This isn't the first time something like this has happened--following the events of Emerald Twilight, Guy Gardner and Alan Scott gathered a team of heroes to raid Oa in search of Hal's whereabouts.

Not that any of that ever happened in the world of the New 52. Except that this is Green Lantern, so maybe it did. It's all very hard to keep track of.

Of course, back then it was Hal who was the villain, having destroyed Oa's Central Power Battery and killed the Guardians of the Universe and several Green Lanterns along the way. This time around, the Guardians are decidedly the villains, raising a third generation of heralds now that they've decided the Green Lanterns aren't living up to expectations.

The issue, written by Geoff Johns and featuring art by Mahnke and Christian Alamy, will hit the stands on November 7.

It's the Justice League Versus Green Lantern in November