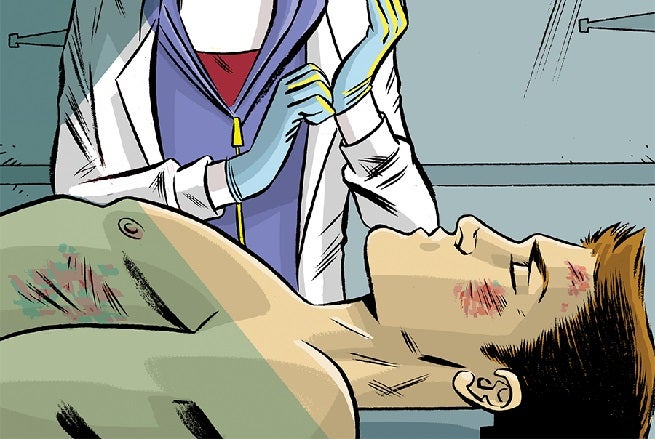 Tonight's episode of iZombie opened on a jarring, frightening shot for fans of Robert Buckley's Major Lilywhite; the character was on the morgue slab, bloodied from his conflict with a large zombie at the end of last week's episode...and for a moment, it seemed his time was up.

It turned out not to be the case -- but back when we spoke briefly with Buckley at Comic Con International: San Diego, he told us that he was worried about just that.

"I'd like to live to see sweeps week," Buckley joked, "but let's be honest: One passionate kiss is all it takes and he's gone. So...we'll see, we'll see. Danger's fun, right?"

Well, so far he's managed to steer clear from too many zombie kisses...but that hasn't helped him avoid a close call, and some obvious danger coming up next week based on the teaser trailer spotted at the end of the episode.

iZombie airs Tuesday nights at 9 p.m. ET/PT on The CW.