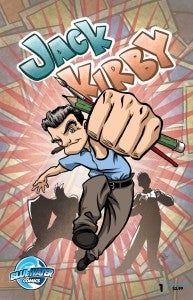 Bluewater Comics will produce a biographical comic book of legendary comic book artist Jack Kirby. It's a move that is long overdue (and possibly symbolic of how he's played 2nd fiddle to Stan Lee), seeing that Bluewater long ago published a Stan Lee book. "When we published 'Orbit: Stan Lee' we understood it was only half the story," said Darren Davis, president of Bluewater Comics. "We knew we needed to share Jack Kirby's story. Every comic book fan owes Kirby a debt of gratitude. He helped lay the foundations of the Silver Age of Comic Books." "Orbit: Jack Kirby" highlights Kirby's amazing artistic talents and how he truly reinvented the comic book.  Written by John Judy with art by Paul Cox, the task of writing about a comic book legend was somewhat intimidating. "What was it like trying to bring to life the man in a comic book who helped reinvent comics? In a word, daunting," said Judy. "I was really concerned that the word balloons for each character only contained exact quotes. I wasn't going to go literally putting words in anyone's mouth." Artist Cox had the greatest challenge: "Going into this project, the last thing I wanted was to draw like Kirby did," said Cox. "I certainly was inspired from his drawing style, and I hope it's evident in this book." "Orbit: Jack Kirby" hits shelves at a comic book store near you in January.