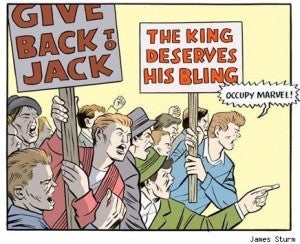 Jack Kirby, the co-creator of The Avengers who passed away in 1994, will be credited on the closing crawl at the end of the film adaptation of The Avengers, according to MovieFone. The artist co-created every male lead in the film (Captain America, Iron Man, Thor, Hulk, Loki and Nick Fury) as well as the earliest stories where the group banded together. Despite his name's inclusion in the film's press kit, there had been some confusion as to whether he would be included in the movie's credits, and that confusion drove many fans to frustration given the legendary creator's long, tough history with Marvel.

A lot of attention has been focused on Kirby's cause in the comics industry recently, following an articulate and persuasive essay by ComicsAlliance's David Brothers discussing the creators' rights and other moral issues that have led him to divorce himself from Big Two comics, notably (and in no small part influenced by) DC's Before Watchmen project and Marvel's movie version of The Avengers.

One of the major concerns that Brothers cites is Avengers co-creator Jack Kirby's shabby treatment of the hands of Marvel, a company for whom he developed or co-developed nearly every important piece of intellectual property that keeps the company viable. The acrimonious and downright disgraceful history between Kirby and Marvel is well-documented, but some of the highlights are touched upon in Brothers' piece, including the company's failure to return his art (which they had a legal obligation to do, given the nature of his work-for-hire contract) and a policy at the publisher of using the return of said art as a bargaining tool to obtain copyright waivers from Kirby. "We have something of value that belongs to you," he was essentially told. "Give us what we want, or you'll never see it again."

Following an unsuccessful lawsuit to recover the rights to a number of his creations or co-creations, which came to a head right around the time Captain America: The First Avenger was in theaters last year, many of Kirby's supporters in and around the comics industry chose the release of The Avengers as a rallying point. Artist and longtime creator's rights advocate Steve Bissette called on fans to boycott all of Marvel's comics and ancillary products, while James Sturm, co-founder of the Center for Cartoon Studies, notably announced back in February that he would boycott the film in solidarity with Kirby.

One of the many more recent issues raised has been the conspicuous absence of any mention of Kirby during the press onslaught for The Avengers. While his litigious heirs and vocal fan base have probably been at play (Disney likely doesn't want the bad publicity of having the co-creator's loved ones going after them the week before the movie is released, for example), the absence of Kirby's name on promotional materials and in interviews had led some fans to question whethe rhe was being cut completely out of the credits for the movie, which could understandably be perceived as yet another indignity doled out to the late artist at the hands of the publisher.

While Stan Lee has also had a contentious and litigious relationship with Marvel over the years, he has usually found a way to make out substantially better than Kirby, being the public face of the company (and of comics) for years and therefore harder for the publisher to run afoul of in the court of public opinion without taking a beating in the minds of the fans. Asked about what the reporter believed to be Kirby's exclusion from the credits, Lee's response came "I don't know how to answer that, because in what way would his name appear?" He went on to tell the interviewer that comics professionals looking to option their properties as movies ought to get professional representation to ensure proper payment and credit.

"The Avengers drives me crazy," Brothers writes in the ComicsAlliance piece. "It's always 'Marvel's The Avengers,' or 'Joss Whedon's The Avengers.' Marvel owns those characters, but Marvel didn't create them....Jack Kirby co-created most of the cast of that film, alongside Stan Lee and others. Marvel explicitly and undeniably screwed Kirby out of what he deserves in a series of attempts to retain the rights to his work."

Kirby's inclusion in the credits is unlikely to silence of Marvel's critics, but it's at least one thing that the studio can do for Kirby's legacy which might not be contractually necessary but which is an ethical mandate. Is it a small and largely symbolic gesture? Of course, but comics is filled with those. At least by getting a credit, Kirby is afforded the same lip-service respect that DC prevails on Jerry Siegel and Joe Shuster, which is...something.

Jack Kirby's Name is on The Avengers' Credits