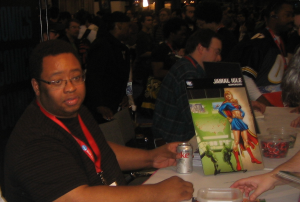 Editor's Note: Following our recent article in which we detailed the objections of Ken Levine (and what seemed to be objections in principle by Kevin Smith) to celebrities like Zach Braff using the popular crowdfunding site Kickstarter, a number of fans reacted to the piece and the sentiments included in it. One such reader, indie comics creator Manuel Carbona, reposted the article with a passionate commentary to the effect that established and famous talents shouldn't use Kickstarter as it provides an uneven playing field for new, unproven creators who need the help more. Molly Danger creator Jamal Igle responded with the following post on his own Facebook page, which we've reprinted with permission.

I'm going to (probably unwisely, but f--- it.) weigh in on this because I seem to be one of the people that Manuel seems to be railing against. I'm not rich, by any stretch of imagination. I work from paycheck to paycheck, most established comic book creators do. So this idea that an established comic book creator shouldn't be able to use a crowdfunding site to raise money for a project is bulls--t. You're argument seems to be that there should be a "level playing field" for crowdfunding projects is unrealistic. Crowdfunding sites, Kickstarter especially have been courting established companies since the beginning. Kickstarter is about development of ideas, like angel investment, except instead of money, you receive a good or service in exchange. I could have never afforded to do Molly Danger the way I'm doing it had I not gone to Kickstarter. Even if I had taken the project to Image instead of Action Lab (which was never part of the plan) I would have still have needed to raise the money to fulfill my vision. Taking it to a DC, or Marvel sized company would require me losing a large portion of the rights to my own creation. Why should I be forced to take a s--t deal, if i have an option to do otherwise, just because I have "a name?" So does that make me a bad person because i used a resource designed for exactly what I needed? The "level playing field" argument really doesn't make sense since there is no such thing as a "level playing field." There is always going to be competition with people or products more established than your self. Even if I had the financial means to produce Molly on my own and you were producing a book at the same time, you would still have to compete with me for the very limited shelf space available. That's just reality. This is not my first creator owned project and i know what it's like to have one fail miserably. Yes, somebody took a shot with Scott Snyder, but Scott worked his ass off to make that shot happen. I've been working in this business for 23 years, no one handed what I have to me. I worked my ass off to make this Kickstarter a success and i work my ass off every day to make sure that the people who pledged to my project get the best comic book I can produce. However, that takes time, and money and making the assumption that I, or Jim Califiore and Gail Simone, or any other established creator are so flush with cash that we can just take six months off to do something, is false. So getting angry at Zach Braff because he decided to go to Kickstarter is stupid. He's not the first celebrity to have a Kickstarter, he's not even the one whose made the most money. People are attacking him because he has visibility. No one attacked Whoopi Goldberg, Emma Caufeild or Eliza Dushku. "While it's not likely Kickstarter will overthrow Hollywood any time soon – making a single episode of Game of Thrones costs more than any crowdfunding campaign has ever raised – there can be a bit of uneasiness when Hollywood plays in the indie world's grassroots sandbox," [Veronica Mars director Rob] Thomas acknowledged when he told Wired it "would be so gutsy" to attempt crowdfunding a million-dollar-plus project that wasn't a known property." Jamal Igle is an American comic book artist, editor, art director and animation storyboard artist. He is primarily known for his pencilling, inking and coloring work on books such as Supergirl and Firestorm. The photo above is from New York Comic Con in 2008. You can find him on the web here, and check out the Free Comic Book Day issue of Molly Danger on ComiXology.