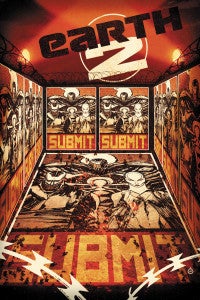 writer and longtime DC Comics staple James Robinson has resigned from Earth 2, his lone New 52 title, and will no longer be working for the publisher for the time being, Robinson informed his fans via Twitter earlier today. "So as of today I am leaving Earth 2 with Issue #16. It's been a blast. Man, it's a lovely day. Think I'll take Rex to the beach," he tweeted early this evening. "Yes, this also means I'm no longer working at DC Comics. Best wishes and regards to Dan, Geoff and everyone." DC Comics declined to comment for this story. Since solicitations just came out, this gives them nearly two full months to select a replacement before they need to solicit the first Robinson-less issue. Earth 2 #15 is solicited for August 2013, so Robinson's run on the title--which will be roughly a year and a half, including a zero issue--will conclude in the fall. Whether "as of today" means that his departure date is flexible (as in, he could stay on to finish a story or be convinced to stay if DC doesn't find a suitable replacement in time) is unclear at this point. It may just be that he formalized the decision today and there is no ambiguity. Earth 2 is the subject of a lot of activity of late, with a new Batman recently introduced and many fans figuring he's a likely candidate to replace one of four recently-cancelled DC titles. The Superman and Batman of Earth 1 (the world on which most New 52 titles take place) will also be headed there in the first issue of Batman/Superman, Greg Pak and Jae Lee's new team-up book set to launch in June. Robinson has worked for DC pretty consistently since 2006, launching a critically-acclaimed Detective Comics run following the "One Year Later" jump after Infinite Crisis. Before the Flashpoint reboot, he worked on Justice League of America, and after the launch of the New 52, he launched a 12-issue maxiseries centered around The Shade, a popular supporting character from his award-winning Starman run from the '90s. That story struggled did well critically, but struggled sales-wise, partly because it didn't particularly fit into the world of the New 52--which, being brand new at the time, was soaking up a lot of the discretionary funds from DC fans looking to try out as many titles as they could.