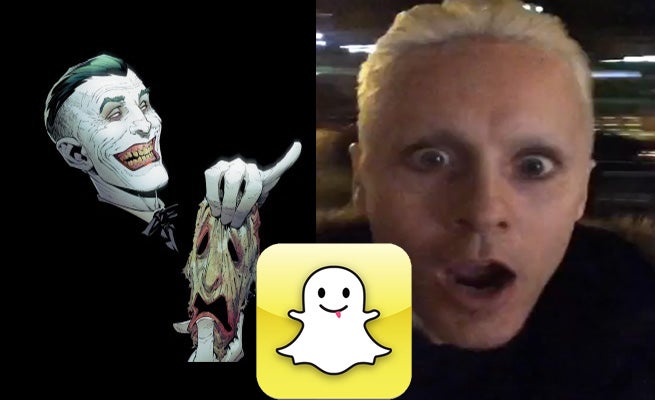 2016's Suicide Squad is quickly approaching. Production will most likely be starting in the coming weeks. This week, Jared Leto shaved his beard and trimmed his locks to prepare for his role as the Joker in David Ayer's film.

Slowly, teaser images of Jared Leto with his new haircut have made their way online by way of David Ayer's and Jared Leto's Twitter accounts. Leto, though, has his own way of showing things off. He's been sending Snapchats out to those who are friends with him on the social media app displaying just how Joker he can not only look, but be. You can watch his most recent in the video below:

It seems like the role of the Joker is taking over Jared Leto. Spinning around in a room with tiled ceilings just for the hell of it and how it looks on camera is one thing... Doing it with a creepy look in your eyes almost as if to say you actually are the Joker, just without the make-up, is another. It seems pretty clear the Leto is taking the Joker as no joke and will do an awesome job portraying the villain.

What do you think of Leto's transformation so far? Will he reach the bar set by Jokers in the past, most recently Heath Ledger, of course?