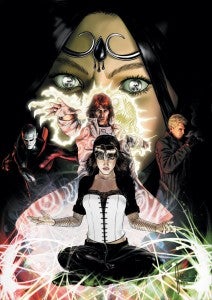 DC has just announced via its blog The Source that Jeff Lemire, currently writing Animal Man and Frankenstein, Agent of S.H.A.D.E. for the publisher, will be taking over Justice League Dark from Peter Milligan, who will leave the title with April's #8. Current artist Mikal Janin, whose praises Lemire sang on Twitter this weekend, will remain on the book. Milligan's final story on the book will be a crossover with Joshua Hale Fialkov and Andrea Sorrentino's surprise hit I, Vampire. Lemire told The Source, "It's a bit daunting to take over this title from someone who I revere as much as Peter, but at the same time I can't help but be inspired by the work he's already done with this book." Hear ComicBook.com's Panel Discussions podcast interview Jeff Lemire here. On rumors that he would be taking over a title featuring one or more of the Robin characters, Lemire told Comic Book Resources this morning that he had no comment, stopping short of denying the rumors although speculation that it would be this morning's announcement obviously proved false. "This is my dream gig at DC Comics, no doubt about it," Lemire told The Source. "The characters in Justice League Dark are my absolute favorite in the DC Comics stable, and I can't believe I'm actually getting a chance to write John Constantine, Zatanna and Deadman." That comment alone will fuel speculation as to the future of the rest of the team (Madam Xanadu, Shade the Changing Man, Mindwarp and Enchantress) since Lemire told CBR that his first issue would see two members leave and three new ones join. At least one of the new members, according to his conversation at The Source, will be a non-magical character, leaving open the possibility of a Justice League liaison, a la Batman's role in Justice League International. He told the DC blog, " I want to explore and create new connections between this team of mystical misfits and Geoff and Jim's big guns in The Justice League. On that note, Geoff and I have had many discussions on how to link our two books and make the Justice League franchises connect in new and unexpected ways." UPDATE: And in the "cryptic hints" department it shouldn't be ignored that Joshua Hale Fialkov just congratulated Lemire on getting the job via Twitter, saying, "I have a feeling they're not done with Andrew Bennett." Given the "Second Wave" of DC releases beginning in May and this creative team change, there's a possibility that May will see large-scale changes for the New 52. With six titles going out of print that month to make way for the Second Wave and Rob Liefeld taking over plotting, writing and/or art chores on three more, it's hard not to wonder what that might mean for the other four titles whose announced collected editions end with their eighth issues--Action Comics, Batman & Robin, The Flash and DC Universe Presents. While it seems unlikely that the top-selling creative team on The Flash would be going anywhere, both Batman & Robin's Peter Tomasi and Action Comics's Grant Morrison have other titles they're working on which might call for a break in the monthly grind. DC Universe Presents is an anthology book and, by its nature, subject to common creative changes. In addition to this morning's Lemire announcement, indie cartoonist and multiple Eisner nominee Matt Kindt announced via Twitter that he would have an announcement coming from the publisher today as well, according to Bleeding Cool.