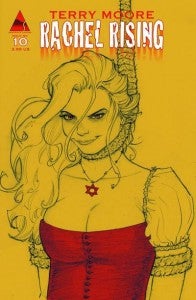 Ten issues in, Rachel Rising by Terry Moore has begun to really arrive at the meat of its conflict, with wrongly-executed 16th Century witch Lilith taking center stage and giving both Rachel and, by extension, the readers and opportunity to get caught up on what's going on in the town of Manson. And it ain't good, folks! It seems as though things are going to get very loud in Manson over the next little while and, leaving aside the possibility that somebody like Tambi Baker might show up to make it even more chaotic, we seem to be officially entering the second act of a three-act play (something that makes since, given that Moore has said Rachel Rising will now last between 24 and 30 issues). Moore joined us yesterday to discuss Rachel Rising #10 and what it means for the rest of the series. So--you've dealt with the fact that the cover is supposed to feature a pentagram, not a star of David--but Lilith is a Jewish mythological figure, and she's referenced explicitly in the first page. Do you think this is one of those situations where the universe intervened and gave you dyslexia? Yes. I'm sure a lot of story twists come from happy accidents. Mine certainly do. Like the time during Strangers in Paradise when I realized I had given a Japanese-American guy a Chinese surname. Trying to explaining that in the story gave me a great storyline. Making lemonade, as they say. It seems like it's been a couple of issues since we checked in with Aunt Johnny, but it's an important one for her--not only does she gets some character beats of her own, but she finally finds out about Jet. Is it tough to keep all those plates spinning sometimes and be sure to come back to somebody at the right time? Weaving plots is a symphonic act. You look at the violins, then the woodwinds, then you nod at the tympani and so on. Sometimes I wish I could get back to somebody quicker, because I know they're working it, stuff happening with them. Timing, it's all timing. Maybe symphonic is too romantic an allegory for how to write a horror story. Let's say it's more like Pink Floyd laser show—a burst of this, a burst of that, sweeeep then something explodes. That little comic relief moment of "This will take forever!" And then Zoe just rolling right out in front of Rachel and Jet feels very cinematic. I actually thought as I read it, "And in a Chevy Chase movie, this is when she'd walk up to them." Did you just feel the need to lighten the mood a little? This was a pretty heavy issue. It just seems that when you're writing a big heavy story, everything ponders along like a semi, so once in awhile you need something to suddenly something rush up to you. It's a subconscious thing, but I think it tires the reader out if every plot ponders along to the same methodical beat. Once in awhile, you need a swift right hook. And life does that—we make long-range plans then BAM!! we're in an emergency room fighting for life. Surprise. 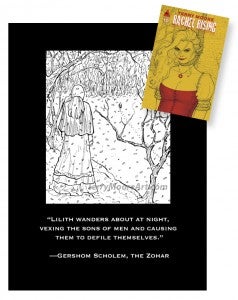 You've already told some people, including that gentleman who was worried about the Star of David, that the book has to do with the Witch trials. This is the first time you've copped to it in-story, though, right? Well, it was pretty obvious, wasn't it? I don't think I spoiled anything for the true readers. The cover "controversy" was about the noose—an African-American gentleman said that was a racist symbol. I didn't know until later that some were commenting about the Star of David on a woman about to be hanged. This cover's been a litmus test, with different people seeing it from their own perspectives. A good marketing person would have kept quiet and hoped the controversies grew into press. But I don't want that kind of press, so I addressed the questions on my blog before the issue came out to assure readers the story was not about racism or persecuting the Jews, it's about witches. They hung witches back in the day. And the mother of all witches is said to be Lilith, from Jewish mythology. Simple as that. Maybe a good horror story should have this effect on people though, offering an abomination that is interpretted differently by each reader. Will we find out sooner than later why Rachel's reaction to Zoe is so much different than Jet's? Just say eventually. That said, Jet's "this is new" is super-creepy. Are the various witches going to have their own very different reactions to the events of the story? Yes, and again, that's just human nature, as we've proven. Where are the cops in this town? Didn't that car accident on the edge of the woods happen quite a while ago? Detective Corpell is on the case. He reappears in #11. And that's Zoe's family car, right where she left it. Remember, the one she dumped her sister into at the house and drove to the woods using a broom stick on the pedals? I did remember that it was Zoe's car, but I'd forgotten about the way she operated it. So now that we have some context, is there an inside joke there in with Zoe using broomsticks--the everyday witch's favorite mode of transportation--to operate the car--the most common mode of transportation in today's America? Or was that just another happy accident? The broomstick as part of locomotion... who knows how subliminal these things are. But it's cute and a very astute observation. That's like a college writing class finding metaphors the writer didn't realise were there. Such classes famously spend an entire class examining the opening sentence,"Call me Ishmael." I don't know if Melville spent a day considering the same and I just thought "How can she drive a car with what she can find in the house?" Nature provides. Is that snow or actual ash that's falling during Rachel's conversation with Lilith at her burial site? Snow, but as Lilith has said, it is also a body count. That's an eerily sinister smile on Lilith on the cover, and we see some of that inside. Was it important to you to set her up in this issue as sympathetic before that big last-page reveal? Yes. And we're not done waxing sympathetic. The story continues in #11 with a hell of a shocking conclusion. Which four is it that Lilith is talking about? Rachel, Jet, Zoe's sister with the wolf and the snake lady from outside the bar? Well, Lilith is including herself in the count of four, and we know that Zoe's sister and the snake lady are included in the witch count—so that's three. And we know Rachel is included, so that's four. So, what is Jet? Hmm.