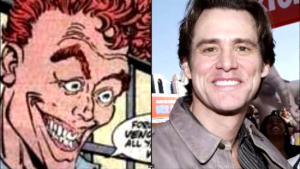 While he might not be willing to promote the gun violence in Kick-Ass 2, the big comic book movie rumor of the day is that Jim Carrey might be playing Cletus Kasady, better known as Carnage, one of Spider-Man's most demented and violent villains, in the forthcoming Marc Webb-directed sequel The Amazing Spider-Man 2.

The characters is currently appearing in his own miniseries, Superior Carnage, written by MAD and Robot Chicken writer Kevin Shinick. You can check out our conversation with Shinick about Carnage here.

The rumors started with a message board user on Superhero Hype, claiming that Carrey was in the film.

Seven Web Heads, known for their set videos and other Spider-espionage, posted a pair of videos today, first claiming they had word Carrey was, indeed, going to play a small role or make a cameo in the film. They speculated that he could play either Kasady or Mysterio, while others thought J. Jonah Jameson was a possibility.

They followed it up, though, with the revelation that back in March, Carrey had visited the set and a fan had tweeted a photograph of himself with the comedy icon to prove it. Given the fact that the scenes shot in March were set at Ravencroft Institute, a mental institution that's home to many of Spidey's nastiest villains, Seven Web Heads followed up with speculation that Carrey would indeed be playing Kasady, who was once an inmate there.

It's a lot of speculation, but there's a bit of meat to it and, frankly, it plays into some of the other sequel rumors that fans have already heard, so expect this to become a persistent question until the movie comes out.

Rumors of a Venom film have been persistent for quite some time, but heated up recently after hints that the fourth Amazing Spider-Man film might not be a fourth Spider-Man film at all, but a spinoff. In the comics, Venom was the first villain to sport a symbiotic costume that gave him Spider-Man's powers (albeit with an aversion to sonics and fire), but the popularity of the character spawned imitators...literally.

Carnage was the first "spawn" of the Venom symbiote, a reference to the villain's biological child and in no way a tongue-in-cheek jab at Spawn creator Todd McFarlane, who created Venom before he left to co-found Image Comics. In the story, the Venom symbiote rescued its host (Eddie Brock) from prison but left a spawn behind, which was found by Brock's cellmate, Cletus Kasady. Whereas Brock was pretty monomaniacal--generally a good guy, except as it applied to Spider-Man--Kasady was a homicidal maniac even before he got the Carnage symbiote and once he had the power to REALLY misbehave, he used it.

You can check out the videos below. More links and information as it comes to us.