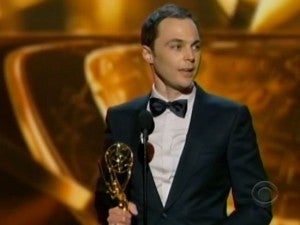 At the 65th Annual Emmy Awards, The Big Bang Theory's Jim Parsons won the Emmy Award for Outstanding Lead Actor in a Comedy Series. Other nominees in the category included Alec Baldwin for 30 Rock, Jason Bateman for Arrested Development, Don Cheadle for House of Lies, Louis C.K. for Louie, and Matt LeBlanc for Episodes.

"I want you to know I'm very aware of how exceedingly fortunate I am," said Parsons. "First to have the chance to do this role in this show--thank you, Chuck Lorre, Bill Prady, Steve Molaro. Secondly, to be here to be a part of such a phenomenal group of people and for seemingly happenstance reasons to be up here right now, thank you so much."