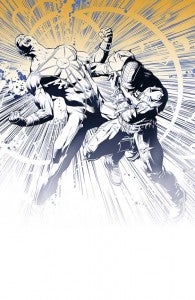 Big creative changes have been announced for DC Comics today, one of which is the culmination of a long-running series of teases by legendary comics writer/artist Jim Starlin.

Starlin, it turns out, will be taking the writing reins on Stormwatch, joined by artist Yvel Guichet. The title will go somewhat more "cosmic" than it has been--which is plenty cosmic already, honestly--and it appears as though he'll be incorporating some old Starlin favorites like Lobo and The Weird into the mix as well.

"Jim has been talking to us for a while now about doing various projects and pitching some ideas," said DC's Editor-in-Chief Bob Harras during an interview with CBR. "He and Dan had been speaking, and he had been sending some ideas to Bobbie and me. Again, one of the things in the creative process, as you talk and discuss various things and -- my term for the day! -- the creative churn, some of the things Jim was coming up with, we thought might actually be interesting to put on "Stormwatch" and change the direction of that book. So it came out of, again, an ongoing conversation."

Editorial director Bobbie Chase added, "[It] was a natural progression coming out of another project, as Bob said. It was such a good fit."

Starlin has been teasing layout pages by Guicet for weeks now, culminating with a final, mysterious page uploaded to his Facebook fan page this morning, challenging his readers to guess what the book in question was (a handful did) and who was drawing the comic (nobody did).

Jim Starlin and Yvel Guichet on Stormwatch in April