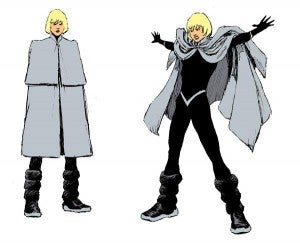 The last time comics icon Jim Starlin shared some concept art from the DC Comics project he's writing, we speculated that it was probably an A.R.G.U.S. book he was working on, on the grounds that the image he teased seemed to look just like some previously-released designs for an A.R.G.U.S. helmet that had surfaced on the DC Comics blog.

Well, this time around, we're a bit more at sea as to what exactly we're looking at.

Last night, Starlin posted the image at left to his Facebook page, along with the caption, "Here's a new outfit design that may or may not be used in the on-going comic series I'm writing for DC Comics. Still can't tell you what it is and I'm sure this posting will only confuse things even further than they already are. Aren't guessing games terrific fun?"

It's not immediately clear who this character might be--and we don't even have an educated guess to go along with it this time. Starlin did provide a bit more information (though not much) in the comments section below the image:

The fans on the thread didn't give us as much to work with as last time, either; the first few people thought it might be Masters of the Universe, due to the Prince Adam haircut on the character, but it seems somewhat unlikely that Starlin would be batting around redesigns with an artist on a licensed property, let alone able to share them, without talking to Mattel in the meantime.

Besides which, the character looks female to us. 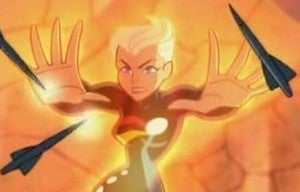 One of the possibilities raised in the comments is that the character could be a redesign of Halo, a former member of Batman & the Outsiders who never looked much like this--but whose most recent appearance on TV's Batman: The Brave and the Bold left her with a Captain Marvel-style haircut that could have been reimagined in this way by Starlin and the artist.

Another possibility, not mentioned in Starlin's comments thread but still rattling around in the backs of our heads, is that it could be Marene, if it turned out that the helmet from last time was an Atomic Knights helmet rather than an A.R.G.U.S. one. Given the similarities to the A.R.G.U.S. helmets, and the fact that the organization run by Steve Trevor promises to play a prominent role in Justice League of America and the upcoming Trinity War story, that seems pretty unlikely--but anything is possible, and a number of fans speculated at the Atomic Knight angle last time around.

While there's nothing in the design that evokes the Atomic Knights, when fully cloaked, the same kind of thing that gave people a Masters of the Universe vibe could be interpreted as going with the Knights's medieval theme. Meanwhile, the Halo option seems somewhat unlikely in that she would be giving up the iconic design of her costume in favor of something more generic under the top layer.

ADDENDUM: Regular ComicBook.com Facebook commenter Joel Bryan shared an idea with us that seems kind of obvious once it's said out loud: could this be a reinvention of Terra? Or one of the Terras? The big boots appeared in the traditional Terra design prior to the New 52 relaunch, and the black-and-white color scheme with the downward V was all there when Atlee took over as Terra after Infinite Crisis.

While the concept of "legacy heroes" has gone by the wayside in DC since the New 52, and the history involving Deathstroke and the Titans may have as well, it's not totally implausible that one of the stories they would choose to keep around is The Judas Contract, in which case the Terra appearing in The Ravagers and this quasi-Terra could be someone else entirely.

Fortnite Leak Reveals Aquaman Villain Is Coming to the Game

Haikyuu Update Has Fans Convinced the Series Will End Soon