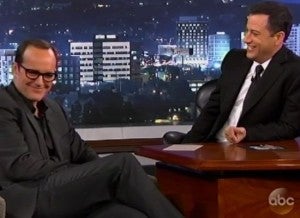 While we thought we had heard just about every theory behind Agent Coulson's return on Agents of S.H.I.E.L.D., Jimmy Kimmel threw out two new possibilities when Clark Gregg was a guest on his show on Tuesday night. Kimmel's two ideas were that Agent Coulson could either be Jesus or a zombie. "Well, I'm not ruining anything by saying you died. Or at least we though you died in the movie. Well, you did die in the movie," said Kimmel. "And then they said we're going to make a TV show, and you're back to life, like Jesus." "I look a little different, but it's basically the same character," quipped Gregg. "I believe Jesus has super powers." After Gregg mentioned that he was excited to go to Comic-Con this year as the back-to-life Agent Coulson, Kimmel said, "You're indestructible now. You're like a zombie or something." Gregg agreed, "I'm really hard to kill. That may be the reveal. We don't know. I keep having this hankering for brains."

Jimmy Kimmel Live: Agent Coulson Could Be Jesus Or A Zombie

My Hero Academia Explains the Surprising Origin of Shigaraki's Name

New Naughty Dog Tease Has the Attention of Uncharted Fans