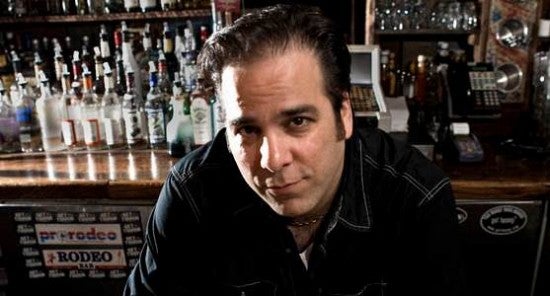 Depending on your age and comic book proclivities, you might know Jimmy Palmiotti as one of the biggest names in creator-owned comics, the co-founder of the Marvel Knights imprint that got his longtime collaborator Joe Quesada the job heading up Marvel Comics or one of DC's most talented and prolific writers (often with Justin Gray) of the last decade or so. Currently, he's sitting on $38,000 worth of pledges toward his sixth consecutive successful Kickstarter campaign (the goal was $31k), this time for an original graphic novel titled Denver with Gray, artist Pier Brito and a soundtrack from composer Hans Karl. You can check out a track from the soundtrack below.

The idea is to advance and enhance the reading experience for the book, which is essentially a crime novel set in a post-apocalyptic near-future where a comet strikes the moon, setting off a chain of events that sinks nearly all of the United States into the ocean. The tale takes place in the real-world city of Denver, a mile above sea level and now home to the safest environs in North America. It's a dystopian tale of betrayal and intrigue that the Kickstarter page describes as being influenced by Blade Runner, Soylent Green and Heavy Metal Magazine. You can check out the trailer for the project below. Palmiotti joined ComicBook.com to talk about the project, his large body of work and about the impact of Kickstarter on the comics landscape. ComicBook.com: You've been one of the most respected names in comics for a while now. Does it even faze you anymore at all when people question the idea of established talents using crowdfunding? Jimmy Palmiotti: I just try to explain to them why I do this and what I am doing. I work for bigger companies, but on their material, not mine. I do creator-owned books for Image, one of my favorite places to work, but these don't always do well for me since I have to lay out a ton of money myself way in advance. I have hits [ The Pro] and I have misses [Creator Owned Heroes] . Outside of Image, you start to give away your rights and you pitch the idea, and they decide if they want to do it, so mostly I have to make the work more focused on the commercial value and wants of each of the companies. With Kickstarter, we get to do whatever I like content wise, minimize the risk by creating the project and making sure the pledge part of the drive offers things people would want to buy, and pitch the idea to a crowd that votes with their dollars. Honestly, if no one liked the Kickstarter pitch, they wouldn't back it and that would be that. I admit that having a following helps, but again, Kickstarter is a store in my eyes and you better be offering something good. Sure, a number of people want to support my work, but it's a two way street. We work hard on our projects and do everything ourselves and the people that back our work comes back for more because we simply take good care of them and deliver the best book we can. So, to wrap this all up, it's all about my control of a project and creating a relationship with the people that support it. I just don't have that anywhere else. 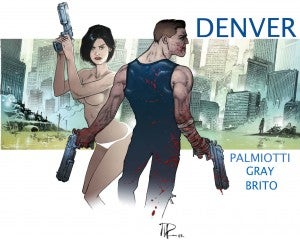 ComicBook.com: I can say myself that what you get for your investment in one of the Jimmy Palmiotti Kickstarter campaigns is top-notch work. What's the difference between this and doing creator-owned work through a publisher like Vertigo, Image or whomever? Palmiotti: Image is totally different compared to most companies since they do not claim ownership to your projects, but there is a pitch process, and after that you have to pay out of pocket for complete production of the book and then a fee to the company per issue. Outside of Image, you have to pitch your ideas to a group that are looking at a different bottom line or at the very least looking to see if what you are pitching will make enough money for them. As well, you are giving a percentage of ownership to some of them, which means handing over some control. I am not against this and have created original work for a ton of companies, but there are contracts involved and rights issues and so on that I don't worry about on a Kickstarter. ComicBook.com: You know, I look at books set in the near future, like for instance Brian Wood's The Massive, and I think that the comic book science they used is so much easier when you just hit something with a meteor. Was that almost shorthand to just get right into the meat of the story and not spend too much energy on the hows and whys of how things got to be the way they are? Palmiotti: Over population and people are destroying the planet at an alarming rate this past century, but things can be turned around. Now…a Meteor is a realistic thing…they hit the planet all the time. With Denver, we don't get into the why the planet is the way it is, we just drop you there and the story takes place from there. I think the right combination of anything can screw with the delicate balance of our planet. Weather and pollution happen to be the main ones right now. The next big flu epidemic can be the nest one. Earthquakes could lend a hand…and so on. I think the how and why might be important if we do a second Denver book. We would probably set that story as a prequel. ComicBook.com: With a ready-made soundtrack for this project, is it something you'd consider playing with the format a bit and going for something like motion comics? Palmiotti: I have to say I admire a lot of what has been done with motion comics. Madefire is making some leaps and bounds with the work they do and I am a big fan of their process. They have figured it out where I feel a lot of others haven't. For me personally, I just don't make enough money on any level to animate these books. I really wish we did. I would love to take something like Denver and bring it to Madefire to see what they could do with it. Maybe that's something I should look into. Hmmm. 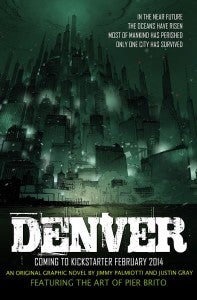