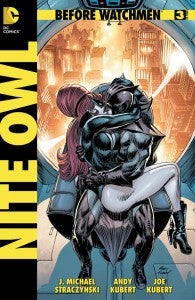 Earlier today, when Watchmen artist Dave Gibbons confirmed rumors that legendary comic book artist Joe Kubert had passed away, the comics industry united in agreement that his enormous legacy would live on forever. Kubert, who created or defined dozens of characters over a decades-long career, also co-founded The Kubert School, where aspiring creators can get the most renowned and focused comics-art education in the country. For a vocal few, though, that legacy has been tarnished by one of his final works: Before Watchmen, the controversial prequel to Gibbons and writer Alan Moore's classic 1980s maxiseries. "Joe Kubert's last work was BEFORE WATCHMEN, which I am pretty sure beats Raul Julia's record for 'worst last creative endeavour' hands down," tweeted blogger Christopher Byrd, to a mixed response from his Twitter followers. Artist Andy Bloor had a similar response, tweeting "So sad his last work was Before Watchmen," before following it up with a somewhat more tempered, "He deserved better at least he will be remembered for the great work he's done rather than this mis-step." Many others ignored Before Watchmen altogether in their comments, but wondered how much of Joe Kubert Presents was finished and might make its way into stores. I'm not bothered by the people who are celebrating that we'll get to see some of Joe Kubert Presents in the near future, a return to his classic characters and a showcase for his great work. But for the people who want to make the passing of a man who made all of comics better for longer than most of us have been alive into an opportunity to score a cheap shot on the opposition is just in poor taste. Joe Kubert was a great artist who gave a great deal to the comics industry. His legacy is the biggest thing he'll leave behind, for those of us who didn't know him personally. Wondering whether his final work would be a big company "event" or a quiet, personal project is a legitimate thing to be curious about when thinking back at his latter-day legacy. But trying to make the corporate event into a club with which to hit the man is just shabby.

Joe Kubert's Legacy and Before Watchmen