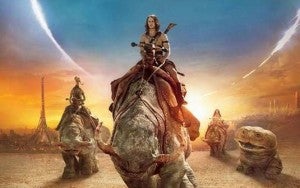 With all of the negative buzz about a soft opening coupled with a poor marketing campaign, it seemed as if "John Carter" was destined to fail at the box office.  And while the film came in at the higher end of many weekend estimates at $30.6 million in the U.S., the film finished 2nd to "The Lorax" (which was in its 2nd weekend).

There is good news, however.  "John Carter" faired well overseas, according to Box Office Mojo.  The film grossed an estimated $70.6 million from 51 territories.  While it didn't play well in Europe, it did produce the 4th best opening weekend ever in Russia ($17.5 million).  Two major markets--China and Japan--didn't open over the weekend, so "John Carter" should see a nice lift there.

It's been said that the film will have to clear $400 million to be profitable, and that outcome seems unlikely.  However, I've said for some time now that Disney's lackluster marketing efforts on the film will force "John Carter" to be a word-of-mouth film.  So pay attention to next weekends numbers.  With only "21 Jump Street" to compete with, the film could still have a solid showing.

The story of "John Carter" is so important to our film and tv culture/history.  It would be really nice to see this film pick up steam.