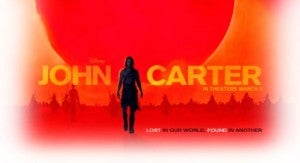 With six weeks to go, the marketing efforts for 'Jon Carter' are picking up. Disney has a Super Bowl commercial airing for the film, and they've just released a teaser for that Super Bowl Spot. Here is the teaser spot:

I'd say that's pretty good marketing. Men that love sports will most likely be the ones going to see 'Jon Carter,' so why not offer up some Super Bowl tickets to keep that audience excited? The sweepstakes period begins at kickoff (6:30pm ET) on February 5th and ends on March 8th. Participants must enter an exclusive code which can be found in the commercial. 'Jon Carter' is based on the novels by Edgar Rice Burroughs. It features a former Confederate Captain who 'dies' and is magically sent to Mars. There, Carter finds himself in the middle of a war and decides to help out the residents caught in the conflict. The film hits theaters March 9, 2012.