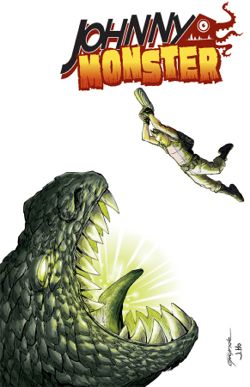 One thing that comic fans can always count on is new monster hunter comic books. Image Comic's Shadowline series has just announced a new one called Johnny Monster. Johnny Monster is billed as "the world's most popular monster hunter." The background story on Johnny Monster is that he became a household name by hunting the monsters who stalk the Earth. The twist is that Johnny Monster was raised by the same monsters he's chasing. A secret that nobody currently knows, but that likely won't stay quiet forever. Keeping Johnny Monster company in the three-issue mini-series will be Image Comics' other monster-man, Firebreather, who will be appearing courtesy of creators Phil Hester and Andy Kuhn. "Even the best action movie only works because it has heart and Johnny Monster has it in droves," Shadowline Publisher Jim Valentino said. "While loaded with enough giant monster showdowns to make any fan happy, the core of the book is writer Joshua Williamson and artist J.C. Grande fleshing out what may be my new favorite character of the year! The whole Shadowline team hopes to see Johnny Monster return in the future!" The first issue of Johnny Monster is a thirty-two page comic which is scheduled to be released in comic book stores on February 18, 2009.