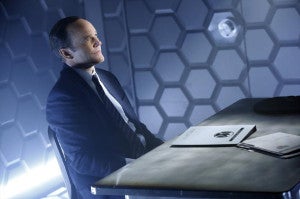 Last night on a special Fandom edition of Earth's Mightiest Show, which aired on Disney XD, moderator Blair Butler spoke with Marvel's Agents of S.H.I.E.L.D. star Clark Gregg and executive producer Joss Whedon about what to expect from the new series, in which Gregg reprises his role as Agent Phil Coulson to lead an elite team of secret agents in the war on supervillains.

Check out what they had to say below.

Butler: Joss you're like a conquering hero - each time you come back you've got some new geeky properties that you've conquered that's under your belt - What's sort of different and exciting about Agents of S.H.I.E.L.D. for you?

Whedon: Agents of S.H.I.E.L.D. is exciting for me because of first of all it is part of the Marvel Universe it relates to The Avengers, it relates to the comic books, it's got that excitement it's sort of what Coulson has, he's an enthusiast about that world the show is like that there's terrifying things, and there's great stakes and there's drama - but at the same time there's this sense of wonder that's missing from a lot of your crime dramas and stuff. So it's a different way of examining the universe that I read as a kid, that I've filmed as a grown-up - it's a whole new avenue to take it - I think it's really exciting.

Butler: Can you guys tell us a little bit about some of the new characters that we'll see popping up in the series - some new S.H.I.E.L.D. agents and some other characters?

Whedon:  Contractually we were not allowed to make anyone cool - because Clark wouldn't allow it.

Gregg: I have so little reserve of cool - that I really couldn't spare any for the other characters around me.But if I did there might be Agent Grant Ward - who is as close to a S.H.I.E.L.D. one man ninja squad as you can get and certainly not painful on the eyes for the ladies. We have an incredible biotech team who share the name Fitz and Simmons - and there's kind of an incredible hacktivist superbrain beautiful hacker named Sky - who's really an antagonist at first.

Whedon:  Of course there's the Agent Melinda May, who has a history with Coulson - who knows him of old, we'll get to explore their past lives together a bit.

Gregg: Both know more about each other than either of them would like.