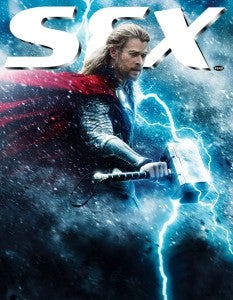 director Alan Taylor sought help from Marvel's The Avengers director Joss Whedon when it came time to tweak the script for the upcoming Thor sequel, SFX reports in their new issue (via a Thor movies fan Tumblr).

The magazine, which also features an article on Marvel's Agents of S.H.I.E.L.D., quotes Taylor as saying "Joss saved our lives a couple of times."

Whedon, who directed the Marvel's Agents of S.H.I.E.L.D. pilot, also serves in an advisory capacity over Marvel's "Phase Two" movies, including Thor: The Dark World and Captain America: The Winter Soldier.

"We had a major scene that was not working on the page at all in London," Taylor elaborated, "and [Whedon] basically got airlifted in, like a SWAT Team or something. He came down, rewrote the scene and before he got back to his plane I sort of grabbed him and said, 'And this scene and this scene?' And he rewrote two other scenes that I thought had problems. Then finally we let go of him, he took off again and we shot the scenes; they were just much better and much lighter on their feet."

While Whedon has hinted that he probably won't be signing another long-term deal with Marvel after Phase Two is over (he wants to have the flexibility to do his own work, as well, according to at least one interview), he's widely expected to direct at least Avengers 3, for which Robert Downey, Jr. is already signed and which Whedon has hinted will pay off threads from the first two team-up movies. The director has also expressed an interest in doing other superhero movies, including a female-led superhero movie, in the future.