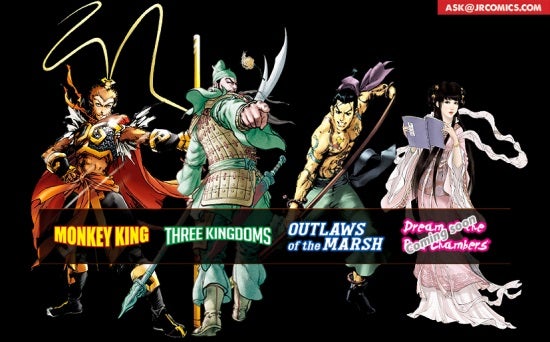 Korean publisher JR Comics will be giving away 6,000 graphic novels based on classic Chinese literature at this year's BookExpo. This is the first time that JR Comics will feature these adaptations, which have received high praise in Asia, at BookExpo. The first two titles from the line that will be available in North America are Monkey King and Three Kingdoms (based on Journey to the West and Romance of the Three Kingdoms). "Although our comics are already tremendously popular with Asians all over the world, JR Comics is on a mission to share the Monkey King's dazzling adventures with North American readers," said JR Han, CEO and president of JR Comics. "We envision many of the 6,000 copies of volume one of Monkey King, Three Kingdoms and Outlaws of the Marsh we dispense at BEA finding its way to the young adult audience." 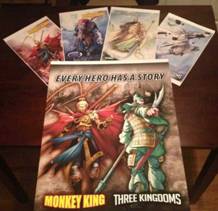 JR Comics' also plans on adapting Chinese classic novels Water Margin and Dream of Red Chamber,  Each of these novels includes more than five thousand historic characters, powerful messages and exciting action. "We've set an unprecedented goal of creating comprehensive adaptations of the East's greatest stories via one of the West's greatest storytelling innovations: the comic book," says Han adding, "The highly acclaimed artist Wei Dong Chen joined us to combine his traditional Chinese painting techniques with modern translations, which resulted in a masterpiece." The publisher is currently working on Outlaws of the Marsh and plans to continuously make efforts to introduce classic Eastern and Western literature in graphic novel form to English speaking audiences with plans to publish a Robin Hood graphic novel in the future. BookExpo America will take place May 29-31 at the Javitz Center in New York City.