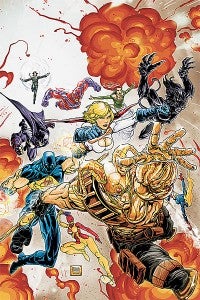 There are some things that are just considered American classics, plain and simple. Uncle Sam, Huck Finn, apple pie and baseball spring to mind, all of which have undergone changes, adaptations and reflections of the American culture's values and beliefs at any given time. In the case of DC's Justice Society of America, the same truths also hold. A fixture since the days of World War II, this amalgam of heroes, personalities and powers has changed, adapted for life in a post-War, and for awhile post-superhero, world and reflected what we, culturally, have wanted out of our heroes over the last several decades. The newest evolution of this team comes in the form of the overall refreshing JSA All-Stars, which saw its second issue released this week. Just how does this team of mostly newbies stack up against the established veterans they splintered from? Not too shabbily! Comprised almost entirely of JSA members who have joined since the latest relaunch of the series almost three years ago, the "All-Stars", so named, perhaps a bit accidentally, by Cyclone have forged out on their own, leaving seasoned members such as Flash, Green Lantern, Wildcat and Mr. Terrific behind. The split came about after some very violent events in the pages of JSA, with a difference in philosophies leading the team, which was getting a bit swollen in the ranks anyway, to break. The pages of JSA All-Stars #1 and #2 show us that while the group is powerful, they are far from an effective team unto themselves. Magog and Power Girl have some power struggles and issues over the use of force and violence, new member King Chimera can't seem to fit in too well, and Stargirl still doesn't understand why no one will fight her. Quite the recipe for confusion! Writer Matthew Sturges effectively handles the team's miscommunication in issue one, when they find themselves fighting a strange military organization called Novyj Soviet and confused on their strategy, with no one able to remember what "color team" they're on to handle either civilians, attacking or other tasks. Sturges is able to give each character a distinct voice and presence in the first issue, which is effective in the set up to the Power Girl/Magog conflict that comes later. As a whole the first issue helps us settle into this new team with a new headquarters and new conflicts nicely, due in large part to Freddie Williams II's art and Richard and Tanya Hories' colors. There's a particularly strong sequence between Power Girl and Stargirl when they're discussing their reasons for being on the team that is nicely communicated visually. These moments overall, and not the more action oriented ones, help make the first issue a comfortable transition for readers. There's more action however, as another hyper-violent team attacks towards the end of the book, all of which moves us closer and closer as to why Stargirl has been avoided in conflict over the past several issue of JSA books. With the second issue however, things begin to feel a bit forced in relation to the building upon what was created in issue one. Even though I said earlier that the first issue does a nice job of setting up the Power Girl/Magog dynamic, issue two feels like it's forcing the tension a bit. A classic example of this comes when the JSA A-S are battling the Injustice Society. Both groups have come for Stargirl, who has now been abducted by Arthur Pemberton in what looks like some sort of arrangement by Injustice Society member Johnny Sorrow. The JSA A-S engage the villains, and during the battle Icicle tries to kill Cyclone. Magog reacts with a bit of hammy melodrama and fires a gun at Icicle, which Power Girl stops just before the bullet "breaks the ice". What follows is a "we don't kill" moment which seems wholly unnecessary given the context and pitch of the battle raging on around them. Meanwhile, Stargirl has managed to free herself from her captors and rejoins the fight at hand, only to learn why the Injustice Society, Johnny Sorrow mainly, has such an interest in her. The JSA A-S return to their base, with Magog and Power Girl once again having an exchange. The risk in the frequency of these discussions that address the same topic is that the characters, Magog in particular, could become one-note and flat when compared with some of the other rich personalities in the group. This new group is interesting and distinct enough to merit its own book, and the creative team behind it are so far navigating a steady course, especially when it comes to balancing the action with the more relational aspects of the characters. More care could be taken with the leadership aspect of the team, at least in the complexity of the two main leaders, lest they be left as one-dimensional symbols of rage and reason. All in all, JSA All-Stars is a sound and logical evolution for a classic American comic book title!

JSA All-Stars A Mostly Fresh Direction for a Classic Team

Only Murders in the Building Fans Shocked by Latest Episode