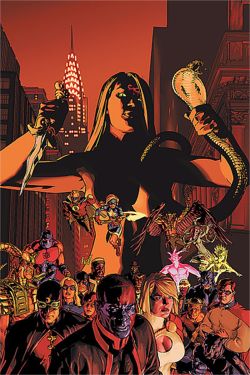 The Justice Society of America emerged during the Golden Age of comics, a band of heroes known initially for their supporting status as individual characters rather than solo stars, but together they were a powerful and symbolic embodiment of American ideals of justice and truth during the time of their origin. What has made the JSA sustainable and all the more fascinating over the years has been the way they have managed to retain an air of purity in their vision and mission, even though they have certainly experienced their share of tragedy, death and roster changes over the years.

This concept is what makes the premise of the JSA miniseries, JSA vs Kobra, all the more intriguing: the JSA, with their mix of experience and wisdom with members such as Wildcat and youth and exuberance with the likes of Cyclone, against Jason Burr, a recently resurrected brother of the original Kobra who has established himself as the head of this fanatical cult of savage terrorists out to create an apocalypse.

This first issue gets off to a cracking, gritty start. Mr. Terrific, in civilian gear, is approached and then almost blown apart by a Kobra agent wearing a suicide bomb device. Give Don Kramer credit for visualizing an explosion sequence with such detail and grit, and kudos to inker Michael Babinski for adding the harsh and dark tones to the pieces, making them truly match the atmosphere we’re starting with.

As the JSA rescues Mr. Terrific and retrieves the remains of the explosive device, Power Girl determines, with swift authority, that the JSA, not Checkmate, will handle this mission, despite Checkmate’s staunch determination to keep an eye on Kobra’s activity. After tracking a group of smugglers working for Kobra, and subduing one for interrogation, Mr. Terrific is able to ascertain information on the whereabouts of a Kobra group who purchased weapons from the captured smugglers.

This scene reveals that Mr. Terrific has, through Checkmate protocols, been able to extract information from prisoners in a way that Power Girl seems to find devious, and which smartly harkens back to some of the central issues of mistrust amongst the heroes during the Identity Crisis miniseries. These little snapshots of character depth are coupled nicely with a recurring element throughout this issue, the narration of Mr. Terrific and Kobra, each lending their views on the nature of humanity, power, and each other’s organization.

Following that, our action shifts to a church, where Kobra has sent several operatives to apparently kill everyone inside, all out of an act of faith for their god. The JSA shows up to foil them, only to have side action shots reveal a much more devious, insidious plot, as a Kobra operative is shown infiltrating the offices of Checkmate to sew the seeds of mayhem through a technological disaster. It's an excellent visual representation of a deadly, slithering organization, poisoning its victim with a quick, deceptive strike. The eerie words of Kobra narrate this sequence of events, content in the knowledge that they, for now, truly have the upper hand.

Eric Trautmann has done a masterful job of storytelling with this first issue, and this promises to be one of the most intriguing and smart miniseries of the summer. A compelling power struggle has begun, with the win at all costs Kobra going up against the principled JSA. How much damage will be done before the JSA has the chance to fully understand Kobra’s plan? The next few issues will tell, but a masterful and well-crafted plot centered around intrigue, human emotion and supported by real, humanizing artwork is in store for readers of this compelling story!