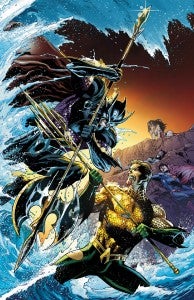 According to commenters on our Facebook page, Eddy Barrows has posted to his personal Facebook page that he is not taking over the art chores on Aquaman but merely did this cover. We were unable to confirm this, due to privacy settings on Barrows's Facebook account.

Writer/artist Rob Liefeld, though, apparently has had some kind words for Barrows in the recent past. He tweeted, "Hope they stick with my suggestion from 3 months ago and it's Eddy Barrows on more than just the Aquaman covers."

After last night's announcement that Ivan Reis and Joe Prado would be leaving Aquaman to take over the art chores on Justice League from a departing Jim Lee, the first question on the lips of a lot of fans was what would happen to Aquaman, one of the biggest surprise hits of the New 52 which may be losing its entire creative team if Geoff Johns leaves, as has been widely rumored following the announcement of his upcoming Justice League of America series.

But a new interview with Johns features art from an upcoming issue of Aquaman that isn't by Reis and Prado, and discusses how it sets up the next storyline.

The story, which suggests that the next arc on Justice League will center around Cheetah and Wonder Woman before moving on to Throne of Atlantis, the Aquaman-centric story announced yesterday and teased in the recent Justice League International Annual #1, in which Aquaman will lead the Justice League against the military forces of his native Atlantis.

"There's still questions of what Atlantis is like and what they do and what they're capable of and why they exist and who sank Atlantis," Johns told USA Today. "There's all this mythology behind Atlantis that were not really sure of and no one really has any answers, and we're about to get the answers."

It also features a cover of the upcoming Aquaman #15, a yet-to-be-solicited issue which most probably expect to be the final issue for Ivan Reis, since Justice League #15 will be Jim Lee's swan song. As the first part of a new story, though (and one that will play into the Throne of Atlantis story), it's possible that for the purposes of the collected editions, DC might see value in starting the new team early.

That could explain the new cover from  former Nightwing artist Eddy Barrows.

Barrows could also just be doing a cover for the issue while Reis and Prado use that time to cover Justice League #15, but that seems somewhat less likely since Reis and Prado have routinely provided variant covers for titles like Superman, Green Lantern and Justice League since the launch of the New 52 and it's never required someone else to take over their main gig.