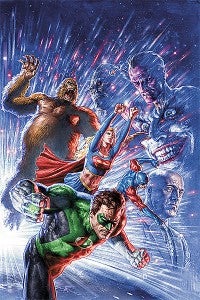 Hal Jordan's mad as hell, and he's not going to take it anymore! So begins a new brand of justice in the DC universe and the first issue of the seven issue mini series Justice League: Cry for Justice. In this James Robinson penned series, a new team emerges to hit back at the community of villains, killers and general evil that has reared its collective head in recent months, causing the deaths of legendary heroes such as Batman and the Martian Manhunter. Beginning with a showdown of sorts between the fabled Green Lantern and his colleagues in the Justice League, the stage is immediately set for the premise of this series: that the Justice League has become less about real justice and more about forming a community of heroes that are reactionary, rather than proactive and protective, especially where members of their own are concerned. Jordan storms off, determined to seek, in his mind, real justice on the collective evil in their world. Joining him without hesitation is long-time friend Green Arrow, who seconds Jordan's feelings and thoughts, squarely leveled at Superman and Wonder Woman, arguably the two most prominent members of the Justice League. The issue continues to unfold beautifully from there, both visually and narratively, as Robinson and artist Mauro Cascioli take us on a globetrotting adventure, visiting some heroes of the DC universe, such as Congorilla (or Congo Bill as he is also known) and The Atom, who will be thrust directly into the forefront during the run of this series. What begins binding the emerging plot, and these disparate characters, together is the theme of loss and the need for justice for those who have caused this death and destruction. The issue ends with an interesting write-up from James Robinson, outlining some of the interesting motivations behind this series and, perhaps more interestingly, the motivations behind the various characters assembled for this team. As a whole, the issue does what many first issues are not always capable of doing, establishing a solid sense of presence and narrative weight quickly and purposefully. Hal Jordan is an appropriate and solid figure to serve as the face of this yet to be assembled group, and his seriousness and earnest approach to justice comes across clearly and credibly in his exchanges with Superman. He makes a valid argument, and it's hard to find a reason to disagree with him. A nice touch also is the use of his friendship with Green Arrow to remind us of the community element of groups such as the Justice League. Mauro Cascioli's art also helps to strengthen the story and in many places it carries a story unto itself, reminding us with vivid details and lots of lines and hatching the unspoken history and emotions behind so many of these iconic characters. There's a humanity to the art that ties everything together nicely with the quest for justice behind the characters featured. Based on this first issue, this promises to be one of the most dynamic mini-series of the year, not just for DC but for all of comics!