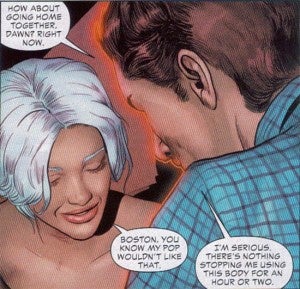 If you are in a relationship with a ghost, then how do you say…consummate the relationship. Well, that's exactly the issue facing Deadman (a.k.a. Boston Brand) and his girlfriend Dove (a.k.a. Dawn Granger) in the second issue of Justice League Dark. To address the situation, Deadman inhabits the body of a random man at a club. Of course, he selects someone half-way decent looking and who looks "clean." He then approaches Dove about going home with him and using the body he's inhabited for an hour or two. Of course, Dawn rejects the proposal, which turns out to be a good thing, because in addition to being clean and decent looking, the man that Deadman selected was also married. His wife turns out to be none to happy to find him talking to Dawn. 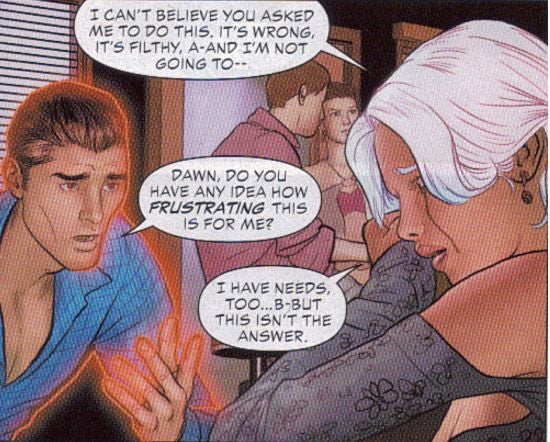 Later in the story, Deadman inhabits the body of a woman named June (this time by request). Of course, while inhabiting June, Deadman also takes the liberty of attempting to live out what Dawn calls a "male fantasy."

Of course, Deadman's actions raise a whole ethical issue involving the people he inhabits. Recently, DC Comics generated quite a bit of sex controversy over the way Starfire was portrayed in Red Hood And The Outlaws. Could Deadman's actions create a new controversy for DC? Probably not, as most seem to be finding the Deadman and Dove sequence to be pretty hilarious. Now, if only Deadman and Starfire could get together.