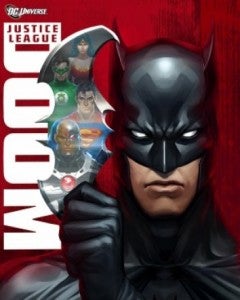 If Marvel is winning the big screen adaptation battle with DC, then DC has certainly and effectively dominated the animated film market for the past several years and the foreseeable future.  While the silver screen gets more attention and notice from the general public than animated, direct-to-dvd releases, the consistent and frequent output of mostly high quality films has kept the DC animated universe going.  The content rarely disappoints, and it's quite fun to see familiar characters and storylines brought to life in a fresh way with quality voice talent.  Enter the latest installment in the DCAU film collection, Justice League: Doom,  a film based on the JLA storyline "Tower of Babel", which debuted in the pages of JLA in the year 2000.  It's a bittersweet entry into the DCAU, as it's the last film to be written by noted writer Dwayne McDuffie, who passed away just over a year ago this past week.  His last entry is a mostly balanced affair, which uses fantastic action shots, engaging fights and internal strife amongst the Justice League to carry a villain with weak motivation and some slow plot conventions.

The story focuses on two main things: one, Batman's obsessive need to control and plan for every possible emergency or scenario and two, a murderous plot to eliminate the JLA from the face of the Earth, using those same contingency plans formulated by Batman in the event that the JLA or any of its members ever went rogue.  The story opens with a familiar group of faces, The Royal Flush Gang, an on-again, off-again group of villains who always make for somewhat of a match for the JLA.  When their attempt at a heist of high grade diamonds, which seems a little cliche' as a comic book film plot in this day and age, let's be honest, goes awry thanks to the JLA's interference, the team attempts to get to the bottom of who hired the villains for the job in the first place.  Finding no luck with Wonder Woman's lasso or Martian Manhunter's telepathy, Batman pledges to continue getting to the bottom of things.  What unfolds, thanks in part to new addition Cyborg, is a quest to find out who has supplied the Gang with advanced technology that even allowed them to get the theft underway in the first place.

Very quickly a classic nod to the old Super Friends television series emerges in the swamps of Louisiana, as none other than seemingly immortal DC villain Vandal Savage steps forth to greet a rogues' gallery of villains such as Metallo, Cheetah, Star Sapphire, Bane and Mirror Master.  All of them are gathered to discuss the takedown of the Justice League and how this will be richly rewarded monetarily.  Watching this part, and a few parts a bit later, reminded me strongly of the Justice League episode arc from season one of the series titled "Injustice for All", in which Lex Luthor assembles a team of villains, a couple making a repeat appearance in this film, to take out the JLA.  It nagged me a little at first, but I was able to forgive that element of the film since most of the action sequences make up for it.

The animation is sophisticated and retains the quality of previous DCAU films; this comes through especially during the fight and action sequences, as each member of the League takes on their respective foe from the aptly named Legion of Doom.  Several of the fights and scenarios are very inventive, with Bane's beating of Bruce Wayne, that's right, not Batman, particularly grim and personal in depiction.  Some traps are better than others, Bane's, Cheetah's and Metallo's being among the best, and Star Sapphire's being a bit pedantic, not really paying off until later on in the movie.  Also, Alexis Denisof doesn't do too much for me as Mirror Master, sounding perpetually tired and as if he is phoning in his performance.  Of course, the Justice League soon discovers that Batman's emergency plans on how to take down each member of the group are behind the villains' ability to surprise and cripple the League with relative ease.  This leads for the remainder of the film to some interesting discussions amongst the team, pitting Superman's cock-eyed trust and optimism against Batman's foresight and lack of inherent trust.

Savage reveals his dastardly plot, along with one of the most bizarre origin stories for a villain I think I've ever heard, which is, once again, a bit ho-hum as comic book plots go.  His motivation for it also doesn't make much sense and feels rushed into the ending of a 77-minute feature.  That's my one consistent complaint about DC's animated films, as high quality as they are; they are always too short by about 15 to 2o minutes.  What is missing in plot and motivation is made up for to a large degree by the final battle at the Hall of Doom once the JLA regroups.  There are some fantastic cuts and editing in these final sequences, as almost every villain and hero gets a good chunk of time on screen.  In the end the JLA's might proves too much for Savage, and his plans are thwarted, along with a new member joining the team that you can probably guess by now (hint: it ain't Cheetah).

The film ends with a nice and appropriate discussion of where the League, and Batman, go from here with their issues of trust and loyalty.  It's fitting really, and it brings a nice close to a slightly uneven story.  The film delivers as an action movie, and again the fight scenes are worth it alone, but the plot and hidden intentions of Savage are a bit too rote.  Still, there are worse films out there.  Grade: B+

League of Legends Sets Location and Dates for Worlds 2020