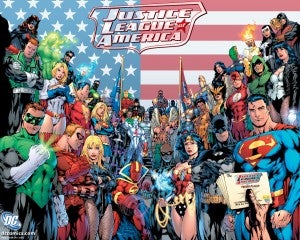 With the Justice League movie finally semi-officially kicking off its filming next year for a presumptive summer 2015 release (which makes sense--it would otherwise be the first big movie season that Warner Brothers didn't have a Batman, Harry Potter or Tolkien movie to anchor it in some time), there's been a lot of speculation as to how, exactly, such a thing would work.

After all, without the five movies building to it that the Marvel Cinematic Universe had prior to Marvel's The Avengers, it seems as though there would be a lot of time spent establishing characters in a film like this. It isn't the X-Men, where the central premise can be said to revolve around one character (Xavier) and the other characters are just people with powers serving as a means to an end. To do the Justice League in that way would devalue the characters who aren't "the ringleader," and even then the question of who truly leads the team is one that fans and comics intellectuals have scrutinized since the '60s.

Everyone's more or less assuming that the studio will use Zack Snyder's upcoming Man of Steel as a springboard, allowing him to skip the process of developing Superman as a character in the film. There are a number of ways around Batman, as well, since his origin and general persona are so well-known to fans. The only other character who's truly essential to the Justice League as far as the outside world are concerned is Wonder Woman, who will be more problematic, although her current (New 52) origin story as the daughter of Zeus gives her roughly the same kind of ease of approachability as Thor had.

But who else would appear? Smart money is on Green Lantern and Flash, at least, although it's hard to say how they would handle Green Lantern. Would he be Hal Jordan? If so, would it be Ryan Reynolds? That would indicate a huge blind spot on DC's part with regard to how poorly regarded Green Lantern was. It would also miss out on a major opportunity to introduce John Stewart, the most notable non-white human being commonly associated with the League by non-comics readers, whose biggest exposure to the team is Justice League Unlimited. (Sure, you had Hawkgirl, too, but she looks pretty white unless you get into her origin story--and is that really a can of worms you want to open in Justice League?) Going with Stewart, though, would require at least a passing reference to an origin story, whereas using Hal would allow them to fall back on what they've already set up with the Green Lantern feature.

And, of course, if Justice League is the massive success Warner is no doubt hoping it will be, it might redeem Reynolds's take on Green Lantern and give the rumored sequel a chance at success.

The Flash is more or less a given. His power set is easy to understand, his origin is easy to tell and it would establish the character with the fans so that Warners could finally make the long-rumored movie based on the character, which reportedly has Arrow showrunner Marc Guggenheim attached to it, or did at some point in its development. Guggenheim's run on The Flash in the comics may not have been the stuff of comic book legend, but it certainly was miles ahead of what came just before it and received a lot of those "the best he could do with what he had" reviews that good writers often get when they're assigned to bad comics.

Those five aside, things start to get very questionable. Whether the studio would even want more than five characters to headline in a movie where only one of them had been established already is questionable at best, but in case they decided to go with the grander scope of the League, here are our candidates for membership: 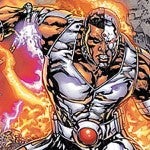 Again, you have to come back to the fact that the Justice League is just lily-white. And the fact that Cyborg was both promoted from Teen Titan to Justice Leaguer recently, and then played a major role in the Justice League: Origin arc that kicked off the New 52, seems telling. It's likely he's considered an integral part of the plan by Warners, and it's even possible that he could stand in for Green Lantern if there were only five characters, avoiding the thorny problem of the failed GL movie while providing the team with a minority hero who punches his weight. 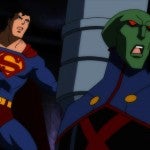 Comic book fans would consider him hard to skip, and of course there's the fact that the character was a fan-favorite on Smallville, which is the kind of thing Warner might look at in terms of how well he could translate to the big screen. J'Onn likely wouldn't be the same one we're seeing in Stormwatch, maybe not even the one we're familiar with from the Justice League of old, but a powerful, shape-shifting character could provide a very useful plot device and the fan base would be appeased that the "soul of the Justice League" was included in the team's first movie. 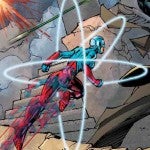 Ray Palmer could be the "science guy." Bruce Wayne is the world's greatest detective, but to have him doing Tony Stark-level geekery in the film would likely leave a lot of fans scratching their heads and just kinda saying, "So...Batman just does everything?".

Adding a super-scientist to the film makes a lot of sense--and if you use either Ray or Professor Stein from Firestorm, it could give you a second-act accident that appears to be a tragedy but really just sets the character up for greatness in the third act or the sequel.

This one's tricky. He's so widely regarded as a joke outside of comics that by adding him, you give SNL a lot of fodder if the movie isn't the greatest thing ever made--but at the same time, it's a property that both Warner Brothers and DC Entertainment Chief Creative Officer Geoff Johns seem invested in making viable.

Like Rocket Red, he could be the Iron Man of the franchise, with all kinds of cool, high-tech toys to suit any occasion. Unlike Rocket Red, he comes without Soviet baggage or an accent; he's carried his own title (briefly) in the past; and he comes pre-packaged with a villain, since he's tied to T.O. Morrow, Provessor Ivo, Amazo and the like.

The League needs a liaison, right? And who better than Maxwell Lord? He basically invented the position as far as many fans are concerned, and could turn out to be a great surprise villain at the end of the movie. Plus, his connections to Checkmate could come in useful in creating versions of some of the heroes who are more grounded in reality.

And then there's this guy. As we said, the League needs a liaison. Having him join in attached at the hip to Wonder Woman, helping along the inevitable "period of adjustment" that she'll have in the early stages of the film, makes sense given that he's so associated with the character. If Lord went bad, or wasn't included in the movie, Trevor could step into the same role with the League at large without much trouble. 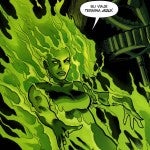 In the spirit of The Avengers, it wouldn't be surprising to see a gorgeous, dangerous woman in a catsuit. Put her in her Checkmate persona--the super-spy who basically plays the innocent "I'm so pretty I couldn't possibly be dangerous" as a cover identity--and you've got something that approaches the level of fun Whedon had with Black Widow in those early scenes.

Plus, it gives a different flavor to the eye candy character than Widow had (while Natasha is nominally Russian, that doesn't really come through onscreen, while Beatriz is always depicted as a fiery Latin woman) and provides the opportunity to diversify the cast a bit. Sofia Vergara, anyone? 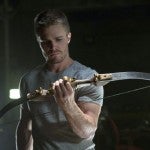 Not particularly likely, since they won't want to create brand confusion from the TV series to the movie, but far from impossible. After all, the show (at least at this early stage) seems to be a success and bringing Amell aboard could lend the movie more of the cohesive feel that the Marvel films had, saying in effect, "We've been planning this for a while--really!"

This one's a long shot, but if he appeared it would serve a few purposes; it might help goose some life into the long-gestating (and currently stalled) Shazam feature film, and it would provide the team with another powerhouse besides Superman if you don't end up using Martian Manhunter. He's also a character that's pretty identifiable to fans from his old movie serials and cartoons. That said, he's incre