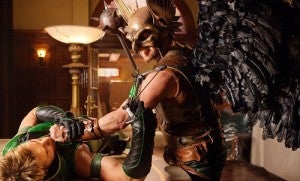 Earlier today, we speculated about some of the DC characters who would fit nicely into a Justice League movie, when and if one actually happens. Part of the fun of these films, now that Marvel has set the standard of having a larger-than-life cinematic universe, is watching to see which of your favorite characters might pop up, be referenced or even turn out to be instrumental to the plot.

But some characters just don't work for some movies.

Justice League will be a movie with at least a half-dozen lead characters (assuming Superman, Batman, Wonder Woman, Flash, Green Lantern and a villain), many of whom will need introduction. There will likely be at least one or two more than that, since both fans and DC/Warner see seven as the magic number for the team.

That could be problematic, especially if you add characters to the mix who either need a lot of character development to work, or who don't fit the tone set by the rest of the film and the rest of the team. So even if you love a character, and want to see them on the big screen, this might not be the right time or place to do either that character or the film justice.

Here are some of our favorites for that last category.

He's a bit like Ant-Man; while he may be iconic, and usually associated with the team, his powers are a bit on the unimpressive side and his backstory requires more time and energy than he really justifies for the first movie. Maybe a second film, tying together the various Egyptian artifacts of the DC Universe, could feature Black Adam and Metamorpho and the Hawks. 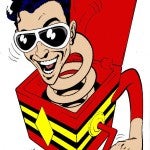 He's just too "Silver Agey" for many viewers, especially those who don't "get" him. And you can't really normalize his persona to fit with the rest of the film/rest of the characters, or the fan base will go nuts. Would it be great to have him on board for comic relief? Sure. But somebody like Blue Beetle could do the same seeming so out-of-place.

There's just too much sci-fi craziness packed up inside of Firestorm. If there was ever a character who needed to be introduced in his own story rather than a team film, it's probably him--and yet it's hard to picture the character getting his own movie. Maybe if Justice League is a success, Warners can jump on the Marvel bandwagon and start including short films with the DVD releases. 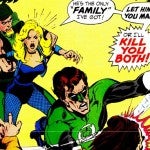 She's sexy, she's iconic, she's a fan-favorite, and of course she's tied to Green Arrow, who's kind of a hot commodity right now...

...but at the end of the day, she's still just Black Widow in a different suit to the average fan. That's how she'll come off and it'll hurt the character's credibility in the long run.

Too much kitsch, it would seem, for the first film. Could they make it work? Sure, but it would take more time than the team film likely has to spare for such a cause. Zatanna is a great character to introduce first as a supporting character in somebody else's movie, but it would be hard to take her seriously in this film without first changing her so radically that the fans work themselves up into a lather. Remember when she had a fairly minor costume alteration at the beginning of the New 52? 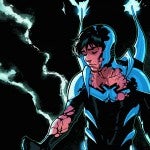 Any version of Blue Beetle would be problematic. Jaime would have too much sci-fi and confusion attached to him, while Ted would be too much like what moviegoers just saw and didn't particularly love in Nite Owl from the Watchmen film. Probably the best approach for Beetle, and any of the other Charlton characters, is in a sequel--for Jaime, for example, you could connect him to the Old Wizard, a la Infinite Crisis, if Shazam is in the first movie.

The best way to make Mr. Miracle grounded in some kind of recognizable real world would be to essentially spend more time establishing him through his circus act than he's worth, unfortunately. He could fit nicely and (assuming the bad guy is Darkseid which, let's face it, will probably be the case) having New Gods represented would make a lot of sense--but it's hard to imagine a way to introduce him quickly and easily. 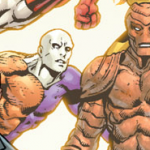 Take the problems with using Hawkman and Firestorm, jam them together and mix them up, and you've got Rex Mason. He could probably be featured in an Egyptian-centric sequel, as mentioned above, but introducing him right away is hard to do because his power set is frankly kind of silly and he's strange-looking. He would take a bit of time to really establish in order for mainstream fans to embrace the character.

Nobody likes John Henry Irons more than me--and it would be great to have a scientist-type who's a minority so that nonwhite characters aren't relegated to muscle and magic...but to do him right, you've got to establish his love for Superman. Maybe include him as a background scientist in this one and not have him suit up?

This one's unlikely to happen, one assumes, because the co-creator of the character tends to be very vocal in his objections whenever he's used. Still, it's worth noting that any African-American character whose name starts with "Black" had better have a damned good reason for it, lest it distract from the conversation whenever that actor is interviewed.