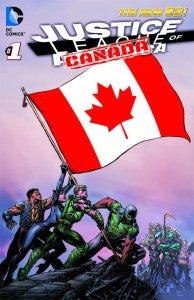 Lost in the uproar of the Ben Affleck as Batman casting announcement by Warner Bros., DC Comics has made another shocking announcement. The Justice League of America is moving to Canada.

As part of kicking off Fan Expo Canada, The Star is reporting that DC Comics will be relocating the Justice League of America team northward and actually renaming the title to be Justice League Canada. The change will take place in the spring of 2014, and new Canadian characters will be added to the series as part of the change. One of the new characters will be Adam Strange, who in his New 52 version will be a Canadian.

The series will be written by Jeff Lemire, who resides in Toronto, Canada. According to a quote from The Star, Lemire said, "This is like my ultimate dream job. It sounds like a joke and something like this would never happen, but it is actually happening, and I couldn’t be happier.”

Why does the Justice League of America move to Canada? While DC Comics is still keeping plot details under wraps, it appears as if the move will occur in the fallout from the events of Trinity War and Forever Evil.