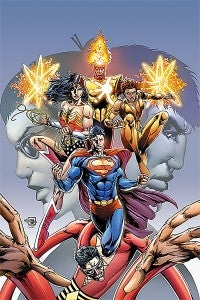 Issue thirty-seven of Justice League of America marks the passing of the torch to the new creative team of James Robinson and Mark Bagley, who will take the reigns, and a new team to boot, starting with issue thirty-eight. The move couldn't come soon enough, as the current issue of JLA concludes what has been a mostly so-so storyline involving the usually more interesting Royal Flush Gang, a group of villains based on suits and ranks in a deck of playing cards. The involvement of villains Roulette and Professor Amos Fortune didn't do much to supplement the action either, and even the conclusion of this current story feels lackluster. After being spread thin while battling a much-expanded Royal Flush Gang, current members Vixen, Wonder Woman, Red Tornado, Plastic Man, Dr. Light and Firestorm find themselves as unknowing pieces in a game of chance and high-stakes gambling between Roulette and Fortune, who are using the JLA and RFG as sides to bet on in a sort of game. What follows in the "climax" to this story comes in this issue, as pairs of the JLA'ers battle members of the gang in different locations. While some of the combos are interesting, such as Dr. Light's pairing with Plastic Man, the action never feels important, and too much posturing by the villains takes place, such as wasting opportunities to try and take out the hero by engaging in dialogue. One "memorable" piece of dialogue comes from an exchange Firestorm has with the Jack of Diamonds: JOD: You wanna see toast flamebrain? I'll show you toast? Firestorm: Fine you want to act like a baby? That's how I'll treat you! This is followed by Firestorm changes Jack's power staff into a candy cane. (?) The rest of the issue follows this pattern of battle scene, cut to Amos Fortune and Roulette going over the result in a "you sank my battleship" sort of way, back to battle scene. There's a minor plot point about the heroes having "bad luck" in defeating the villains, but this is quickly dismissed and has something to do with technology the Gang has and yada yada. The issue ends with the requisite showdown between the JLA and the two main villains, following the RFG's eventual defeat. The issue ends with the promise of future problems from these two main baddies, not to mention an interesting cameo from a long-time foe of the JLA. Robinson and Bagley's arrival on JLA can't come soon enough. The team is struggling to find a voice and a unifying direction, understandable after the recent events with both Superman's life-changing decisions in the New Krypton storylines and the death of Bruce Wayne as Batman. It's natural that there would be some shuffling, but here's hoping that this new team is able to clear a more compelling path for one of DC's flagship teams than was seen in this most recent story.